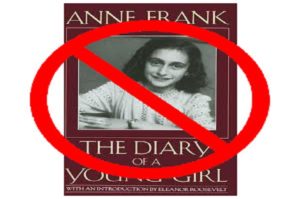 It’s back-to-school season which means every news headline for the next few weeks on Fox News will be some parent complaining about their child learning historical facts while saying “woke” in every sentence.

Today it was revealed that one day prior to the student’s first day back, the Keller Independent School District in North Texas has removed 41 books from the school libraries’ shelves. Some books included on the list were the Bible, an illustrated version of The Diary of Anne Frank, and “dozens of other books that were challenged by parents last year,” per The Jerusalem Post’s reporting. They also obtained a copy of the email that was sent directing the book purge for the school district.

“By the end of today, I need all books pulled from the library and classrooms,” wrote Jennifer Price, the executive director of curriculum and instruction for Keller ISD. This is one of many lists calling for book removals to appease the conservative activist parents and school board members. Most challenge the books on the grounds of them being LGBTQ+ friendly and their supposed connections to “critical race theory.”

Not all Keller ISD parents approve of the book bans. “It’s disgusting. It’s devastating. It’s legitimate book banning, there’s no way around it,” Laney Hawes, a parent of four children in Keller ISD, told reporters. “I feel bad for the teachers and the librarians.” Other books most likely being taken off the shelves are Toni Morrison’s “The Bluest Eye,” Alison Bechdel’s “Fun Home,” and Jon Ronson’s “So You’ve Been Publicly Shamed.”

“This group of people elected to our board, and the crazy parents behind them, decided that the committees must be rigged,” Hawes continued as she described the parents who would attend school board meetings claiming “conspiracies to take over our public schools,” wearing shirts reading “Alex Jones Was Right.” Anyone who gives an opinion related to education standards while wearing an Alex Jones shirt should automatically cancel out any opinion they loudly state.

The school district said in a statement to one news outlet, “Right now, Keller ISD’s administration is asking our campus staff and librarians to review books that were challenged last year to determine if they meet the requirements of the new policy…Books that meet the new guidelines will be returned to the libraries as soon as it is confirmed they comply with the new policy.”

Keller ISD may sound familiar, and that’s because it is. In 2021 the Keller ISD was the subject of an investigation by the Texas Education Agency. It was during this time which current Republican Texas Gov. Greg Abbott falsely alleged the district was making “sexually explicit” books available to students.