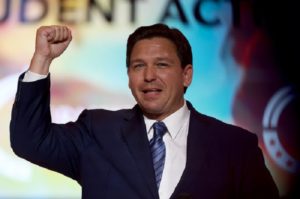 Florida Republican Governor Ron DeSantis held a press conference on Thursday where he announced the arrests of 20 people on charges related to voter fraud. The arrests, which span across five counties, were on the basis of voting illegally. All the individuals charged had cast ballots in the 2020 election, but had prior convictions for murder and/or sexual assault which makes them ineligible to regain their voter rights in the Sunshine State.

The arrests come at the conclusion of a two-month long investigation that was led by Gov. DeSatan’s newly established state agency which specifically handles investigating election crimes. Making the announcement from a Broward County Courthouse in Ft. Lauderdale, the Governor elaborated on the individuals currently facing charges, and reminding Floridians that more arrests will be made including some non-citizens who have allegedly voted.

“If there are certain rules and regulations in place, if people don’t think that those are going to be enforced, you’re going to have more violations,’‘ DeSantis said with just five days before the 2022 primary election that will decide who will be his Democratic opponent in November. “That’s just the way it goes.”

It’s great to see the law and order Governor putting his election police to good use. It’s not like those taxpayer dollars could fund better things. This is also a great time to show voters who DeSantis truly is — election fraud is bad. Stealing classified nuclear documents and storing them in a Palm Beach resort? Now that’s just being a true patriot!