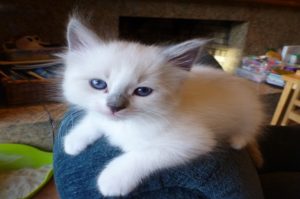 Renpet slowly came down the stairs, curled her tail around her and sunk into the couch (Renpet is the feline member of the Curmudgeon family, a former CIA agent who has supposedly retired).

Her yowl sounded exhausted and frustrated. Seated across from her in his recliner was Galahad (the brilliant Siberian Husky, holder of several significant graduate degrees, her cousin form the canine side of the family. Gally, as he was known to the rest of the family, was responsible for the smooth running of the entire Curmudgeon household.)

Pushing his reading glasses onto his forehead, and carefully folding his newspaper, the Husky turned to his cousin and inquired, “What on earth is the matter? You’ve been through emergency jumps from planes, dodged bullets, rescued individuals under dangerous circumstances….and not uttered one groan?”

“Just save me from cranky kittens!”

“It’s just that,” continued Renpet, “they want me to read them a story that they choose and then they become impossible and cry because the story scares them…and they want me to keep reading…and then they throw their toys around the room and they cannot quiet down. Can’t wait until my brother and sister-in-law get back from their vacation.”

“What were you reading?”

“Just what the little monsters insisted on. And they promised to go right to bed if I read some of it. Little liars! It was ‘Frankenstein.’”

“We live and we learn,” smiled Galahad. “But why did you read the novel written by Mary Shelley, when you could have read her mother’s signature work?”

Renpet slapped her forehead, “You’re right, my cousin. I have a copy of the book by her mother, Mary Wollstonecraft.”

“Ah,” said Galahad. “A marvelous idea. Even though it was published in 1792, it is a truly definitive work. I did read it in college. ‘A Vindication of the Rights of Woman.’ And I even remember some quotes!”

Renpet nodded her head. “Mary Wollstonecraft was not only a superb writer, but she had to be very brave. Living in that era and advocating fiercely for women’s rights. I recall that she had written this groundbreaker during the time of the French Revolution and it caused all kinds of debates across the British Empire.”

“Indeed, Renpet, during the eighteenth century, women didn’t have the same right to an education as men. There were double standards and it was felt that women were inferior to men. But Mary Wollstonecraft put forth the argument that if women seemed inferior, it was only because they were not allowed to have the same education.”

Sighing, Renpet said, “You are so right. Wollstonecraft felt obligated to write her book as a reaction to Talleyrand’s report to the French National Assembly in 1791. He told them that women should only be allowed to receive a domestic education. She attacked him over his double standards and crafted her most important work.”

Renpet continued, “And I remember this quote from Talleyrand, ‘Let us bring up women, not to aspire to advantages which the Constitution denies them, but to know and appreciate those which It guarantees them…Men are destined to live on the stage of the world. A public education suits them…The paternal home is better for the education of women; they have less need to learn to deal with the interests of others, than to accustom themselves to a calm and secluded life.’”

In an effort to relieve the muscle spasms she had acquired from sitting on the little chair by the kittens’ bed, Renpet arched out her back. “In those days, it was actually believed that women were inferior to men.”

Leaning over to hug Renpet, Galahad grinned, “They never met you, Renpet!”

“Let me just say, that Wollstonecraft’s arguments were very far ahead of her time, especially when she wrote about a national system of education to operate schools in which the sexes were mixed…”

Sitting back, and folding his forepaws across his chest, Galahad quoted from “A Vindication of the Rights of Woman.” “”Women ought to have representatives, instead of being arbitrarily governed without any direct share allowed them in the deliberations of government… I do not wish [women] to have power over men; but over themselves.”

“Good luck with that,” Galahad grinned as he returned to his newspaper.