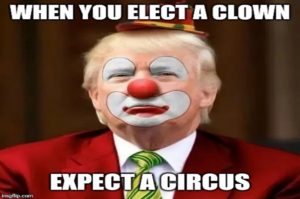 There are occasions when the political system of any other country than your own causes you some confusion. We are all apt to say things like, that would never happen here. On this occasion, I can attest that the idea a former high powered political figure would ever be pursued under our treason act, would be unthinkable.

That Donald J Trump is being thus pursued makes me dumbfoonert.

I am at a loss for both words and any form of comprehension.

That they found 11 classified documents compounds the felony. That Trump denies any wrongdoing is a Trump trope. I swear to God, America must have huge numbers of big bad boys, because the normal excuse of a recalcitrant child in Scotland is to claim that a big boy did it and ran away.

Trump is no big bad boy.

He is a coward, bully and fraud of the highest order who makes Machiavelli look like a Sunday Picnic amateur. His masterful political machinations have been bold, audacious and stunningly successful. If anyone else had tried to do what he has achieved, they would have looked in a mirror, disliked what they saw and come clean.

Many years ago, I was involved in politics at university, and was part of a team trying to get Conservative political writer Jeffrey Archer elected as the Rector of the University of Glasgow. A ceremonial role that carries no payment but great power, he was trying to resurrect his political career by trying to become the elected head of the University. Since those days my politics have radically altered and he turned out to be a scoundrel, convicted of telling lies in court and serving time in prison.

He was an audacious liar.

But he told me something that stuck with me. I am often reminded of it when I hear of political wrongdoing. Archer spoke of how Civic Duty, the voluntary offering of doing work for others for no reward was being lost in our civic lives. People now look to what they can get out of such a thing, he moaned. At the time I was not struck at the irony of what he was saying – he was fighting a student election as a Conservative in a city which detested his political party so that he could get back in favor with that very party – but it was something about which he had real insight.

It stuck with me because he may have been a wrong ‘un, but he was right. Politics has lost some of its gloss because of people like Trump. The people who love the office so they can play golf. They love the power to help their friends. They do not get into power to improve the lives of strangers.

Trump’s infantile behavior of keeping the candy after he lost the jar, when everyone knows he once had the candy jar is simply ego. He is an egoist.

And the people who support him should stand with him in the dock, accused of the greatest calumny visited upon the American people since goodness knows when. In the same month that the sickening idiot, Jones was shown to be a fool, we now have Trump exposed potentially as a danger not just to democracy but to the American people.

And you voted him into power. His vote in the last election – counted fairly and squarely – gave him the second highest total for any Presidential candidate in any election.

How is that possible? And it is that which really makes me totally dumbfoonert.