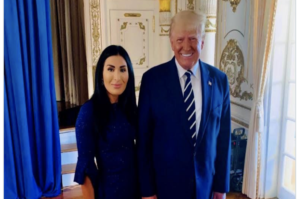 “I’m not conceding but I am just saying, this is not an 80,000-vote difference. I’m talking about 5,210 votes and when you look at the impact that big tech and social media and the internet plays in our society today, there was no denying that there was voter fraud and election interference in this campaign,” she said. During her speech, Loomer said “we are never going to have another free and fair election in this country ever again until we strongarm the Republican Party into addressing these issues.”

The video of her speech gained over a million views on Twitter already. Loomer, a 29-year-old QAnon follower, was one of the Trump candidates who lost on Tuesday. Florida State Rep. Anthony Sabatini (Q) also lost his primary race. Sabatini has close ties to Joel Greenberg, the disgraced Seminole County tax collector who’s been the lead snitch on Rep. Matt Gaetz and his minor purchases on Venmo.

Unfortunately, Loomer won’t be the last to use the election fraud lie as a reason for not winning. We’ve already seen Arizona’s Trump-backed GOP Gubernatorial candidate Kari Lake claim it when she was already announced as winner (not joking). There are multiple primary elections coming up this September, and the midterms in November where I bet they accuse every Democrat who wins of election fraud.