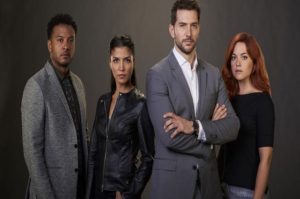 Increasingly television has found itself being the focus of international co-productions. We can buy into the cliché of the world being a smaller place due to the internet, foreign travel etc. but the economic reality of having a product backed by several producers who can make a contribution to the overall costs, simply makes economic sense. Coupled with geopolitical alliances between several countries, where some countries are in such close proximity that some of their neighbor’s television channels, being no respecter of boundaries, spill into their border towns, literally next door, it also makes sense creatively. The fact is that culturally there are few differences between an area on one side of a border and the opposing area across the way – Alsace and Lorraine spring to mind between France and Germany.

Ransom which ran from 2017 to 2019 is a perfect example of this. Funded between Canada (Global), France (TF1), Germany (RTL) and the US (CBS), it had 3 seasons with 39 episodes and introduced us to an international fixer – Eric Beaumont played by Luke Roberts. The premise was that Beaumont was a highly, and much haunted, crisis and hostage negotiator. He would insert himself on behalf of victims to find a solution with some of the most dangerous criminals globally. It was loosely based on the real-life work of Laurent Combalbert and Marwan Mery. Beaumont was assisted by a team including an investigator – Zara Hallam, played by Nazneen Contractor, a profiler – Oliver Yates, played by Brandon Jay McLaren, and a couple of assistant negotiators in Maxine Carlson played by Sarah Greene and Cynthia Walker, played by Karen LeBlanc. Carlson departed during season two having used deadly force when she saved Yates’ life.

There are notable other characters including Beaumont’s ex-wife, Nathalie Denard, played by Emma de Caunes who is in charge of an insurance company, Beaumont’s nemesis, Damian Delaine, played by Carlo Rota and Beaumont’s love interest in season 3, Kate Barrett, an FBI agent played by Natalie Brown.

With locations as far and wide as Toronto, France and Budapest in Hungary used for filming it had an international flavor from the very beginning.

The first season was quite intriguing and well considered and included the traditional tropes of things like hostages in a bank, human trafficking, terrorist threats and a missing sick baby but also some medical intrigue and moral complications over leukemia treatments, AI engineers who go missing, the use of social media to entrap teenagers and even when Beaumont himself is kidnapped. It ends with an edge of the seat story about terrorist bombs that could go off, but Beaumont and the team work tirelessly – of course they do – to prevent them. There is, in the background, some lurking suspicion that all is not well within the team and many hangovers lurking from their pasts – of course there is!

Overarching narratives are important to keep us coming back, as long as they fit the narrative of the genre. If we end up going too far away from what it was that attracted us to the series in the first place, rather than boredom setting in, we become disillusioned with the series. It is a little like an experimental album from a favorite group. We might accept one departure from their norm, but if it becomes a habit…

I was enjoying this and eagerly got straight onto season two. And it got a little off the beaten track…

Beaumont’s daughter made an appearance in the very first episode and … she had been kidnapped. Beaumont required help from his rival, Damien Delaine. He got it and this narrative is one to which we would return. The season continued with new problems from forensic accounting to spies and diamonds in Vienna, somebody trying to break up the team, one member of the team meeting a former abuser and Beaumont’s mother being kidnapped. In an attempt to fill out their back stories, characters were given opportunities to flesh things out. And then Delaine returned leading to a strange plot which just about kept us on board but the whole destabilizing the world economy alongside brainwashing story was beginning to stretch me.

Series three returned to some form as we got family threats, internet predators, vengeful police officers, but also Italian fashion royalty, Dutch Prime minister’s daughters, a Russian Prima Ballerina and Beaumont’s new girlfriend, Kate becoming the focus of an assassination in Bogota. Tensions within the team were exacerbated as one case saw a former kidnapper return and make everyone question Beaumont’s policy of letting perpetrators walk free.
Aside from once more, Beaumont’s family being at the center of a case, it continued to keep us engaged well enough, bur cracks were beginning to widen. What we did not know was that between seasons one and two international backers were beginning to cancel/pull out/ return to the fold… Such uncertainty could have led to actors looking elsewhere, crew feeling it too and unrest beginning to manifest itself.

And so, when it was cancelled after three seasons it was no surprise. It had a decent run, and it was pretty darn good. It brought something different to the genre. It never got the ratings nor the recognition which would have guaranteed a long-term future run. I kind of miss it. Beaumont did become annoying as he was a flawed genius and anyone having anything to do with him – ex-wife, mother, girlfriend, daughter – seemed to suffer accordingly, but it had some charm. The supporting cast made sure of that and by the end it had certainly run out of some steam, but I would welcome a reboot rather than a rewatch.