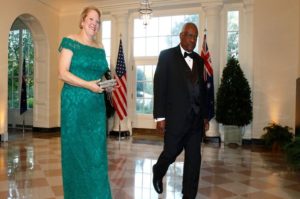 The Washington Post revealed on Thursday that Virginia “Ginni” Thomas, wife of Supreme Court Justice Clarence Thomas, had tried to overturn Wisconsin’s electoral votes for the 2020 presidential election. Ginni Thomas is already under investigation for her meddling in Arizona over the state’s electoral votes for President Joe Biden in 2020. According to the report, Thomas emailed legislators in both Arizona and Wisconsin weeks after the election to convince them to change the electoral votes from Biden to Trump citing election fraud.

For months we’ve heard about Ginni’s attempts to change the outcome of the 2020 election — specifically on how unhappy she was about Biden’s victory. While she may not have stolen classified documents, Thomas certainly tried to steal an election in two states for Donald Trump. Considering that we now have confirmed documentation of efforts — notably coming from official public records — it’s reasonable to wonder why she and her husband have seen no consequences. After all, it’s a little concerning that her husband sits on the highest bench in the country.

A quick recap on the first state, Ginni Thomas emailed 29 GOP lawmakers. Yet now there’s more emails that she sent to Wisconsin lawmakers in November and December 2020. In the new Wisconsin emails that were obtained, Thomas messaged two Republican lawmakers in Wisconsin: state Sen. Kathy Bernier, who at the time was then chair of the Senate elections committee, and state Rep. Gary Tauchen. On Nov. 9, 2020, both Bernier and Tauchen received the email at 10:47 a.m. at almost virtually the same time the Arizona lawmakers “received a verbatim copy of the message from Thomas” per The Post. The Bernier email was obtained by The Post, and the Tauchen email was obtained by the watchdog group Documented and then provided to The Post.

All of the emails were sent via FreeRoosts, an online platform that enables users to send pre-written emails to multiple elected officials simultaneously. “Please stand strong in the face of media and political pressure,” the emails sent on Nov. 9 stated, only days after major media organizations called the presidency for Joe Biden. “Please reflect on the awesome authority granted to you by our Constitution. And then please take action to ensure that a clean slate of Electors is chosen for our state.”

Currently, neither Thomas nor her attorney, Mark Paoletta, have responded to requests for their comments on the matter. Ginni’s political activism has been called into question numerous times while her husband has sat on the SCOTUS, however, the scrutiny intensified drastically after her efforts and text message conversations with Mark Meadows were publicly revealed. Her claims of election fraud included ideas like the Biden’s facing a military tribunal at Guantanamo Bay for fictitious sedition charges.

As for the lawmakers she sent the messages to, Bernier, the Wisconsin lawmaker, said “it would have been appropriate for the state legislature to consider decertifying the 2020 results in the weeks following the election if evidence had emerged of significant voter fraud” per The Post. “But as we went through the process and the legal challenges were made and discounted by the judicial system, there was nothing proven as far as actual voter fraud,” she said.