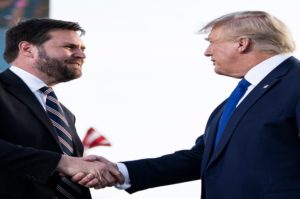 Poor J.D. Vance is one of the GOP’s Trump-picked candidates that prompted Mitch McConnell’s concerns last week over the GOP’s potential outcome this November. In less than six weeks Ohio voters will begin casting their ballots, but Vance is nowhere to be found. CNN wrote an excellent report which points out how the rookie Ohio candidate goes days without any appearances and his campaign doesn’t even let you know where he’s been or going to be.

Vance has also been slow with fundraising operations and an overall strategy. He’s also been significantly out spent on air, and incurred almost 900,000 in debt for his campaign just last month alone. It appears the a conservative super PAC that has ties to Sen. McConnell is also about to spend $28 million on television ads for Vance to help retain what was once an easily red Senate seat.

The whopping multi-million dollar figure from the PAC is the GOP’s final attempt to avoid a major, midterm upset that would give Democrat Tim Ryan the title of Ohio’s newest senator. “J.D. is running a campaign where the faithful in the state, the county chairmen, the precinct executives, the executive committee and the Republican Party are saying, ‘where’s J.D.?'” said Bill Cunningham, who is a conservative radio talk show host within Cincinnati for 40 years. “And they want him to do things. People want to meet him. They want to. This is a new guy, new kid on the block.” Cunningham also added that: “He’s been spoken to by at least one US senator and at least one governor he respects to kick him in the ass.”

Some Republican strategists point the blame at the National Republican Senatorial Committee for failing to provide Vance with the necessary resources it’ll take to win this race. Per their initial reporting, NRSC spokesman Chris Hartline told CNN, “We’ve worked very closely with the Vance campaign and will continue to do whatever is needed to help him win big in November.” By the end of June, Tim Ryan outraised J.D. Vance by five-to-one.

There’s no doubt that Republicans can win the seat, but it seems that the road to a win is going to be long and costly.