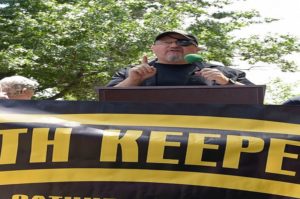 Wednesday morning started off with quite a blast. The infamous white-supremacist Oath Keepers membership list was released publicly, and it revealed a lot of red flags.

The list, which was compiled by the Anti-Defamation League, a non-profit group, revealed the names of over 38,000 individuals who at one time have been members to the group. Included in that number were 373 individuals who currently serve in law enforcement — including at least ten police chiefs and sheriffs — as well as more than 1,000 who previously served in law enforcement. At least 117 active military members were also found on the list. Another 81 Republicans who serve as elected officials were among the names listed. Additionally, the ADL determined at least one in ten names listed had previously served in the military.

The ADL also identified 86 individuals who are believed to be active fire fighters – including several fire chiefs – as well as 19 active paramedics and 31 emergency technicians in the database. Per the ADL report, “It should be noted, however, the Oath Keepers did not just draw supporters from the professions they explicitly targeted. Among the many professions held by list members are religious figures, teachers, civil engineers and government employees. Some individuals reported holding top secret clearances or had jobs that gave them access to critical infrastructure such as nuclear facilities.”

“The Oath Keepers are a virulently anti-government, violent extremist group, whose members have been arrested in connection with a wide range of criminal activities, including seditious conspiracy and other charges related to the Jan. 6 attack on the U.S. Capitol, and including various firearms violations, conspiracy to impede federal workers, possession of explosives and threatening public officials,” said ADL CEO Jonathan Greenblatt. “To know that members of this group have permeated key aspects of civil society should serve as a wake-up call to people of all political persuasions that extremists hell-bent on destroying our democratic norms are making in-roads across the country.”

This is a big f-cking deal. Any member of law enforcement, first responder, military or elected official participating in a militia group should be fired immediately. It’s a violation to the oath they served to protect. Letting them stay involved in any organization affiliated with law and order is a danger to our country and those of us who are real American patriots.