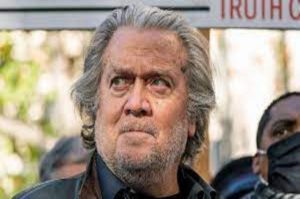 Thursday was full of “happy Steve Bannon perp walk” wishes as the former Donald Trump aide turned himself in New York. The disheveled looking Bannon is facing state charges for money laundering, conspiracy, and fraud related to the “We Build The Wall” scheme to raise money for a wall at the U.S. southern border.

The NY state charges are premised off the charges federal prosecutors charged Bannon with in 2020 where he and three other grifters took in over $15 million in donations then used them for personal expenses. Bannon was later pardoned by Donald Trump but presidential pardons do not cover state charges.

“It’s all nonsense. They will never shut me up,” Bannon said while leaving court on Thursday. Manhattan prosecutors worked in conjunction with the NY state attorney general’s office. Bannon may claim he is being persecuted because he’s a conservative, but this is far from the actual truth.

Bannon and his co-conspirators told supporters that all funds would go directly to building a wall along the US southern border, however, he was “involved in transferring hundreds of thousands of dollars to third-party entities and used them to funnel payments to two other people involved in the scheme,” per AP News. The indictment does not list names, but the details match those of Brian Kolfage and Andrew Badolato, two of the other men who pleaded guilty to federal charges this April.

Even bigger, Bannon’s legal prospects should worry Donald Trump. He is slowly seeing that regardless of having a presidential pardon granted (or “self-pardoning” like he contemplated) that the multiple state charges he and his businesses are facing are likely inevitable. This would also enhance Trump’s desire to kickoff his 2024 presidential announcement, seeing that the Oval Office is the only way he will avoid being charged.