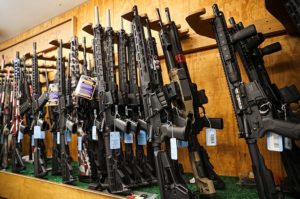 Well, dear readers, I have, regretfully and unhappily, been out of action due to a bit of serious surgery, but happily to report I am bouncing back, as doc says, “pretty decently,” and, above all, glad to be back with you on Mr. Berkwitt’s Ringside Report.

And it has, of course, and as it will only continue to do as it gets worse and worse, thanks to the FAR right wing morons, numbskulls, nitwits and other assorted American trash and garbage which voted for and still supports the anus who was our former president, a male (he sure as hell is not “a man”) who rates not only as the worst—the absolute worst—president in U. S. history, but is the lowest of the low, the most corrupt, the most degenerate, the most vile and vicious and the biggest liar, all of those his good points, gotten worse, and I refer to the weapons carnage in this country thanks to him and to the absolute and utter perversion of the Second Amendment.

Now, to get to the point of our column title, “it” has happened again as a day of terror in Memphis has left family and friends beside themselves with anguish and pain as four were murdered and three were wounded in Memphass. Tennessee including the grandmother of three children now left without parents, the man who lay down following the shootings beside his fallen best friend and refused to leave and the daughter whose dear and wounded dad is her whole world . And all of this horrific ravaging of families and friends due to and because of one penis-brained moron who at least as large penis-brained morons in this country “elected.” Simply put, how, in a democracy, does a person who lost the election by six millions votes, get into the White House, and the answer of course is the nonsensical, idiotic, long, long, long outdated electoral college. What a bunch of crap that is today.

Trump, the scumbum, the lowlife, the whore mongering, degenerate, lying, thieving, draft dodging (FIVE phony deferments), phony bankruptcies-taking (six of them, all phony), piece of garbage has, essentially become America’s Hitler, and had Mr. Biden not beaten him, fair, square and honestly (words not in Trump’s vocabulary) we would be Heiling Trumpler every time we would see one of his sick, brain-damaged supporters.

There is no question that Mitch McConnell is the most dangerous man in America, but in truth and fact, he is totally abetted by every Rethugnacan congressperson and senator, all of them total traitors and completely disloyal to this country and everything it stands for, and, possibly even worse, they aided and abitted by such as the late and anything but lamented Lardass Limbaugh, Glenn Dreck, Spawn Hannity, Whoreah Ingram, Michelle Malformed and the rest of that lower than whale feces on the bottom of the ocean human detritus. (I can’t think of the name of the other scumbum on Faux Noise who spouts out that lying manure)

And now, have you seen the latest? One of those bums who participated in the January 6th insurrection is asking the judge to allow him to go to that hideous and vile events anniversary with his traitorous co-conspirators. Frankly, the penalty for treason, as I understood it, was either firing squad or death by hanging, which should have been the fates of each and all and every one of them.

As for the mass murders—Connecticut, Texas, Florida—forget the death penalty, ‘cause the appeals can go on for years and I have a better idea. Seriously. How about life in prison in solitary confinement without the one hour a day nonsense in the prison yard by themselves? In solitary, for the rest of their miserable, vile, disgusting lives and with no visitors under any circumstances. In solitary until death do them part.