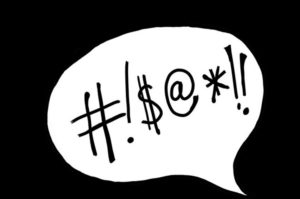 Swearing in Scotland often feels like punctuation. The Big Yin, Billy Connolly is best referred to when wanting to understand the extent to which swearing has become part of the Scottish DNA. He has a plethora of examples in his act where swearing is the choice of the cultured, the erudite and the most effective way of getting rid of people.

As he has said before, nobody ever wrote, Fuck Off he hinted.

I rarely use swear words when I am writing. I use them daily vocally. I was brought up in a house where there was no swearing. Its deliciousness was something into which I grew. I graduated between High School and University but never used it in front of my parents. The most effective swearing can often be the hint of it and the ellipses of comments which allow the recipient of such bravado to fill it in themselves. In Scotland that refers to the phrase – get tae…

To where one is to get to, is indeed rather obvious. For those less than with me – it rhymes with duck.

Left hanging in the air, people are nevertheless left in no doubt about the force and effect of such words.

Over the last few weeks that has clearly been the message to one Sarah Palin. The Alaskan people have tellt her tae get tae…

The biggest positive is that for the very first time an Alaskan native, Mary Peltola, has been elected to Congress instead. Isn’t that a beautiful thing?

It is perhaps too much to imagine that one of the most divisive figures of the early part of this century has the political intelligence to realise that this is in essence a permanent state of affairs and she should permanently just get tae, or that it is an indication of the tide against populist alt-right like politicians. Whatever the effect on Palin and her ilk, the electorate’s message is significant.

Any move which sees such divisive figures being cast into a wilderness should be welcomed. Democracy is under threat from them. President Biden has it totally right. These people do not want to participate in a democratic process because it is, in their eyes, skewed against them. Democracy invites people to scrutinize them, hold them to account, analyze their behavior and hold it up to the ballot box for a judgment. They would prefer to be left alone to get on with whatever they do not want us to witness.

“It” is often the abuse of power and the feathering of their own nests. They benefit. We suffer.

By the time you read this the United Kingdom of Great Britain and Northern Ireland shall have a new Prime Minister. It shall either be a woman or an Asian. Both are minorities in the nation, and we should welcome either, positively. They are, however, part of a populist movement in the Right politically, the wrong morally. I am fearful of our short-term future. I am terrified.

In two years, or less, there shall be a General Election. In England, the majority part of the UK, opposition to the sitting Government is not strong. We could end up afterwards with a strange looking parliament. In Scotland we are opposed electorally to the UK Government and have not voted for them as a party as a nation since the 1950’s. It is one of the reasons we want out of this disunited kingdom. 13 elections in a row we have voted for a party that wants to leave the UK but lost a referendum to leave in 2014. Democracy can be confusing…

Sarah Palin’s defeat gives me some hope, however, that whilst the likes of Victor Orban can be applauded at a minority political event and Trump has been touring round to ovations but there is a feeling in Europe that the tide against populist alt-right style parties is beginning to wane and decline; it is clear that democracy is beginning to reassert itself.

The battles in Ukraine which show that some people, like our forefathers and the women before us, are willing to lay their lives on the line for a principle, still exist. It is worth dying for. It is worth risking your livelihood and your family for. The First Lady of Ukraine, in an interview with the BBC journalist, Laura Keansburg responded to questions about support waning for the war internationally in the face of growing economic concerns, especially in the UK by pointing out that “in Britain you are counting the pennies, in Ukraine we are counting casualties.”

Democracy is too fragile and too important not to heed the threat and unlike in Ukraine, all we need to do is to vote them out. In Ukraine they have to die for that to happen.
It’s time to tell the rest tae get tae…

Get tae – The beginning of a phrase, often accompanied by the word fuck, which means that to whom they are referring should remove themselves from close proximity to whoever has uttered the phrase…