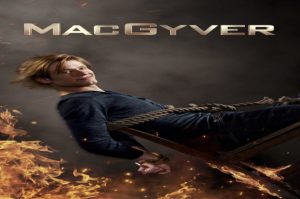 So, controversy aside, and we shall get to that later, this began as quite the explosive television experience. Over 94 episodes stretched over 5 seasons the Phoenix Center took center stage in the fight against… bad guys.

The premise was a carbon copy of the original. Some wee guy was a genius at problem solving using science. Angus “Mac” MacGyver played by Lucas Till is an undercover agent who hates guns so tries to not use them. As a reboot and developed by Peter M Lenkov it joined Hawaii 5-0 and Magnum PI as 3 new shows that were old shows and which Lenkov was behind.

Till’s MacGyver was ably assisted by the all action Jack Dalton played by George Eads , who hung around for 3 seasons and then left, perhaps realizing what was coming; the head and then the traitor of the Phoenix Patricia Thornton, in season 1 played by Sandrine Holt; lifelong friend, flat mate and comic book tech genius, Wilt Bozer played by Justin Hires; Matilda “Matty” Webber, played by Meredith Eaton, the replacement director for The Phoenix who lasts all the way to season 5; tough operative Desiree “Desi” Nguyen played by Levy Train who plays the love interest for Mac in her role which arrived in season 3 and trundled through 4 and 5; and Russell “Russ” Taylor played by Henry Ian Cusack who is a former MI6 agent who brings the cut glass English accent to the table. Russ is also the money behind the Phoenix in seasons 4 and 5 though he arrives with a bit of a shady “former arms dealer” past.

Amongst many other special gusts slots and other core characters there is a deliciously special villain in Murdoc, played in cartoon like fashion by David Dastmalchain. He is around and about from seasons 1 to 3 with a hiatus in 4 he returns in 5 and we can see why. He is Mac’s nemesis and in season 5 is given a little bit of a more human backstory.

Now here’s the thing, being a highly successful show, MacGyver looked certain to last and last. Then, seemingly out of nowhere, CBS announced that the 5th season was going to be the very last. It became clear as the series wound down and cast members were able to speak out just why the show was coming to an end– and here is the controversy.

Lenkov was allegedly horrible on set. The pressures placed upon the actors were particularly harsh and Lucas Till, especially, has spoken of being bullied and body shamed. I watched the whole 5 seasons oblivious to this, but you can see that the actors become increasingly less believable throughout the last 2 seasons, perhaps even the 3rd series too? It was as if they were hoping that someone would stop the carousel ride because they were sick of it. I was becoming tired of it especially the backstory of Mac’s family – with a father who died helping him and to whom he tries to live up and season 4 in particular with the whole aunt as an evil woman trying to achieve world domination – which left me totally frozen rather than just cold!

As for Lenkov – he was fired after an investigation and replaced.

For me, it had already lost the plot. The original premise of fighting crime in single episodes with a possible crime lord at the back as an overarching theme was hardly new but the more outlandish conspiracy plots led to more cartoonish development and eventually you could see and hear the creaks, joins and it was just too melodramatic. I was beginning to see more ham than in a high-end deli onscreen.

What I did like was I the second person narrative of the series as Mac would guide us with a reassuring voiceover but by the end of the whole damn thing, I was looking for a better structure than Mac assuring me all was well and believable; it was neither. It needed more outside of itself to regulate what was happening within itself – in short, it had to be anchored to the real world more and less of the imaginary, alternative universe. After Eads left, ostensibly to spend more time with his daughter, during season 3, ratings had begun to fall but it was still number 1 in its time slot!

I was sad to see it go but hardly surprised as it had begun to feel desperate. It is no surprise that Lenkov’s other 2 reboots – Hawaii 5-0 and Magnum PI have also suffered the cancellation fate. For Hawaii 5-0 it was down to the lead struggling to maintain the physical effort needed to keep filming as the show was tough on the body. As for Magnum PI it is being touted that it may have been picked up for filming by another station/crew. I hope it will be, but MacGyver can lay in rest and stay there for the moment.