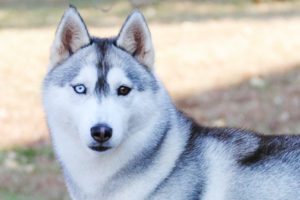 The Siberian Husky pulled the quilt over his nephew’s tummy, just the way the puppy liked it.

Galahad is a canine member of the Curmudgeon family; with many degrees, including one from Oxford in Ancient History and Antiquities. Due to his vast travel, educational experience, and two Ph.Ds, he serves on several think tanks, advising government and industry.

Sebastian, the half Samoyed-half Husky youngster, enjoyed his weekends with his Uncle’s family. There were always wonderful bedtime stories to be heard.

“Tonight,” said Galahad, “We are going to talk about a library.”

The puppy’s eyes widened as his ears twitched. He knew what a library was, but he wondered why he had to learn about them.

“Libraries are beautiful places. And I have spent so many delightful hours, browsing through shelves, grabbing a book and looking through it as I sat in such a wondrous place, Sebastian.

“But tonight, you will learn about the most famous library of the ancient world: the Library of Alexandria.”

Curling up against his Uncle, Sebastian said, “I know that Alexandria is in Egypt. Right, Uncle Galahad?”

“It was a politician from Athens, by the name of Demetrius of Phaleon who started this great library. I don’t know why Demetrius was exiled from his home, but King Ptolemy I, who ruled Egypt at that time, knew about Demetrius. And the king was very impressed with the education and extensive learning of this exiled statesman. And so, Demetrius was tasked with creating a library.

“This library was so comprehensive and so vast that it became an integral part of an institute of higher learning which was called the Alexandrian Museum. The library became a center for the most learned scholars in the land to gather and to do research.”

“Wow, Uncle Gally, I didn’t know that. Must have been wonderful to be in that place with all the books and all the other scholars, just talking and reading and exchanging ideas.”

“There was a great deal of work in setting up this library. Books were purchased from Athens and from Rhodes. Some were brought from ships that docked at the Alexandrian harbor. The books from the ships were copied by scribes and then returned to the vessels.

“Then they were placed into subject categories so they could easily be referenced. We think that the Great Alexandrian Library housed between 200,000 and 700,000 books”

Sitting up in his bed, Sebastian asked, “When did this library start?”

“Oooh, Uncle Gally. I have a great idea. We’ve been planning a family vacation for a while. Why don’t we all go to Alexandria and browse in this library?”

Sadly, Galahad shook his head. “We can’t. Nothing is left of this magnificent library. Some stories say it was destroyed by fire when Julius Caesar, the Roman General had to set his own ships ablaze while they were in port at Alexandria. He did this to defend his fleet against Egyptian forces of his rival, Ptolemy II. Not the same Ptolemy who had the library created. And the library just happened to be among the buildings destroyed.. There are other reports that the library just dwindled as books were stolen.

“Our online source, Wikipedia says,” Despite the widespread modern belief that the Library of Alexandria was burned once and cataclysmically destroyed, the Library actually declined gradually over the course of several centuries. This decline began with the purging of intellectuals from Alexandria in 145 BC …, which resulted in Aristarchus of Samothrace, the head librarian, resigning from his position and exiling himself to Cyprus. ‘”

“That is so sad,” murmured Sebastian as his sleepy head reached the pillow and he began to gently purr.

Smiling at his beloved nephew, Galahad kissed the puppy’s head. The Husky rose, turned off the light and gently closed the bedroom door.