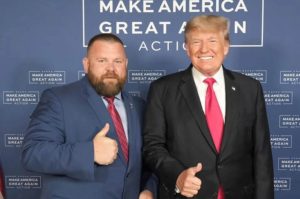 In a MAGA district in Ohio it appears that the GOP has seemingly given up on one of their own. This week Ohio Republican J.R. Majewski — who is the GOP nominee for U.S. Congressional District 9 — has found himself in quite a scandal. After it was reported that Majewski lied about his military record, reports now reveal that House Republicans have officially withdrawn over $1 million in advertising for him as of Thursday.

Majewski has previously been campaigning as an Afghanistan veteran; however, the AP obtained documents related to Majewski’s military service via a public record request. What they discovered was that Majewski never actually served in Afghanistan. Instead, he was stationed in Japan for the majority of his active duty service. He also helped load planes for a six month stint at a U.S. base in Qatar, one of our nation’s allies in the Middle East. Majewski has described himself as a “combat veteran” throughout the campaign trail. Last year he had tweeted about going “back to Afghanistan.”

“I’m a veteran of OEF. I’d gladly suit up and go back to Afghanistan tonight and give my best to save those Americans who were abandoned. Why isn’t our “President” all-in?” he tweeted on August 25, 2021. Another instance was during an interview on the One American Podcast where Majewski claimed he served two tours in Afghanistan in 2002 and 2003. When asked what his experience there had been like, he replied, “I don’t like talking about my military experience.”

The AP’s report also noted that Majewski was never awarded any medals that were given to service members who served in Afghanistan. One example they highlighted is that Majewski claimed he went 40 days without showering in Afghanistan, yet he does not have an Afghanistan campaign medal which was awarded to those who had served there for “30 consecutive days or 60 nonconsecutive days.” The AP gave a burning summary of their thoughts on Majewski’s war tales. “His post-military career has been defined by exaggerations, conspiracy theories, talk of violent action against the U.S. government and occasional financial duress.”

While Majewski’s race lies in a conservative-leaning district, he still is in need of the House GOP’s support if he’s to defeat Democratic Rep. Marcy Kaptur who has put out ads slamming the conspiracy theorist/insurrectionist. “He broke through police barricades at the Capitol, then blamed police for the riot. Now he wants to break our country apart,” one of Kaptur’s ads says. “He’s not just radical, he’s dangerous!”

The loss of support comes as a surprise to most considering House Republicans haven’t held anyone to a certain standard besides the GOP members who refused to swear allegiance to former Cheeto-in-Chief Donald Trump. It was only last month that House Minority Leader Kevin McCarthy (R-CA) was campaigning for Majewski, and only last Friday night that Donald Trump praised him at the eerily Nazi like rally where the crowd held up their pointer fingers as the former guy rambled on with his nonsense.

This isn’t the first time Mr. Majewski has stirred the pot this election cycle. Rolling Stone reported that he’s “been known for turning his lawn into a shrine to Trump, as well as rapping about how President Biden is “crapping his pants.”He’s professed devotion to QAnon, the conspiracy theory holding that Trump is going to save the world from a cabal of Satan-worshiping pedophiles, and though he has tried to distance himself from the cult at times, he once said he “believe[s] in everything that’s been put out from Q.” Then there’s his involvement with storming the Capitol on January 6th. Majewski has stated that he “wanted nothing more than to go in that building,” referring to the Capitol, last Jan. 6.

Majewski has not denied that he fabricated his war tours since the news broke. He told the AP in a statement, “I am proud to have served my country,” he said. “My accomplishments and record are under attack, meanwhile, career politician Marcy Kaptur has a forty-year record of failure for my Toledo community, which is why I’m running for Congress.”