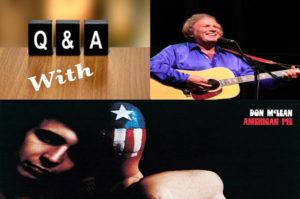 Don McLean needs no introduction. We all know his great songs “American Pie”, “Vincent” and “Crying”: Still as beloved as when they were released. He is currently on tour in The UK and Europe for the 50th Anniversary of American Pie. Check him out!

KB: Did you always want to be a singer and musician?

KB: Your first big hit was American Pie. What inspired you to write these great lyrics? Did you expect it to be this successful?

I wanted a big and unique song about America. I did not plan for or expected success.

KB: I adore Vincent Van Gogh and visited his grave in France a few weeks ago. How did you write the song Vincent? What inspired you?

I learned that Van Gogh had the same illness as his brother. He did not die of a broken heart. That made me decide to write about him

KB: Your version of Crying is better than the original. Why did you want to cover the Roy Orbison song?

I felt I could really understand the song Crying and slowed it down to create tension. Nobody can touch the original or any of Roy’s performances

KB: Did you ever record your favorite songs on an album?

I made two “favorites” albums

KB: Are there currently artists who you would love to collaborate with?

KB: Is there a song you love so much you wish you had written it?

Satisfaction because everybody is so unsatisfied

KB: You are currently on tour in Europe. How is it going?

I love The Uk and the many European cities I will visit. Beautiful food, architecture and people.