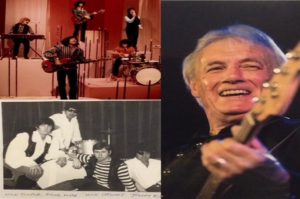 Nick Simper is a bass guitarist and co-founder of Deep Purple with Jon Lord, Richie Blackmore and Bobby Woodman. After his departure he founded the band Warhorse. He works together with Vienna-based band “Nasty Habits” with whom he will perform at The Reigen, Vienna, on the 8th of October. If you are in the area, go check it out!

KB: Was music and becoming a musician your first love?

No. I had early ambitions at school to become a geologist. My elder sister began bringing home rock n roll and skiffle records, which completely changed my ideas!

KB: Why did you choose bass guitar?

I didn’t choose bass initially but played lead guitar in groups for several years. In early 1964 I formed a very good band but discovered that decent bass players were very hard to find, whilst good guitar players were plentiful, and most of them better than I was! This led to the decision to play the bass myself, helped by a professional bass-playing friend who taught me the rudiments. My Gibson guitar and Fender amplifier were traded in at Jim Marshall’s first West London shop for a second-hand Fender bass and one of Marshall’s very first 4 x 12 bass amps. I soon found that I was a better bass player than a guitar player!

KB: You played with Jon Lord in The Flower Pot Men: was this your first encounter and did you founded Deep Purple together?

I had briefly met Jon Lord in 1966 whilst I was a member of Johnny Kidd and the Pirates. About a year later he joined the Flower Pot Men when the regular keyboard player had to leave through ill health. Jon and I became great friends and together with Ritchie Blackmore and original drummer Bobby Woodman we formed Deep Purple and began searching for a vocalist.

KB: You played bass on the first 3 Deep Purple albums and then left: what happened?

To say exactly what went wrong could be a book in itself! The whole episode is a very long story which I will soon be dealing with in depth during a future chapter on my website. The short version is that a new vocalist was secretly selected without my knowledge, and he came with a bass player as a complete package. The group chose expediency over loyalty, which became their trademark, and so I left before I could be pushed!

KB: You then formed Warhorse but the band never reached the status of Deep Purple. Why do you think this is?

There are many reasons why Warhorse was not the commercial success that Deep Purple was. In many ways it was a better band but, like the majority of musicians, we were not good businessmen. We were absolutely plagued from the start with management problems and record company problems which led in turn to financial problems. For me it was a huge success in artistic terms, and we were all very proud of the group and what we achieved during our 4 years together. It is gratifying that Warhorse is now recognized by many as a pioneering group that took heavy rock in a new direction and without doubt inspired some of the new wave of musicians that came after.

KB: In 2016 Deep Purple was inducted into the Rock and Roll Hall of Fame. Alle members from 1968 – 1974 were inducted but you as one of the founding members were snubbed: Why and how did you feel about this?

I never viewed the Hall of Fame as relevant to rock n roll and as such it held little interest for me. Of course, to be honored after a lifetime in music would have been appreciated although not expected. In the end only one original member of the group was present, and apparently even the other members were uneasy at my exclusion, but to me it held little importance and was a farce very quickly forgotten.

KB: If you could make an album with 7 of your favourite songs (No Deep Purple or Warhorse): What songs would you pick and why?

1. Roadhouse Blues by the Doors. I always loved this song and love the way that audiences react when it is played on stage. The perfect encore!

2. Real Wild Child. I grew up on the Ivan version which most people know was Buddy Holly and the Crickets with the drummer singing (Jerry Ivan Allison). I always wanted to play this on stage but never did.

3. I Fought The Law. One record I would take to a desert island! Covered many times, the Bobby Fuller Four has to be the best version.

4. Shakin’ All Over. With Cliff Richard’s “Move It” this has to be the best British Rock n Roll record ever made. I have played this song in every band I have ever been with for the last 60 years, including the great Johnny Kidd himself who, of course, wrote this marvellous song.

5. The Price of Love. When I heard this in 1965 it really sounded so different. At the time I was in a rock n roll combo called Buddy Britten and the Regents and we began playing the song in our act. Although no one could ever match the vocal sound of the Everly Brothers, audiences everywhere loved it. I still do.

6. Words of Love. Buddy Holly was one my all-time favourite performers and this song still raises the hair on my neck.

7. Sea Cruise by Frankie Ford. This is a song I love to play and has to be one of the best feel-good records ever made. Like all the above tunes I never tire of hearing it.

KB: Are there any singers or musicians out there you would love to collaborate with and why?

There were only 2 people that I really wanted to collaborate with, but they were both in the past. The first was guitarist Mick Taylor, who I met when we were both briefly involved in a new group in the 60’s called The Gods. 3 years later we met again in America where Mick was playing with John Mayall who was supporting Deep Purple. He had blossomed into an amazing player, and we found that we both really hit it off. During the 2-month US Tour we discovered a lot in common and had a lot of fun. Of course, life with Deep Purple was extremely hectic but at the end of the tour I resolved to keep in touch with Mick and see if we could possibly record together.

Then I heard the news that he had joined the Rolling Stones and I never saw him again. The other person was more recent, namely Doogie White, a great vocalist, most famous for singing with Rainbow. I had never met Doogie before, but a promoter put us together for a couple of gigs in Brazil. Some people just light up your life, and Doogie was one of them. We didn’t stop laughing from start to finish. When a new vocalist was needed for my latest band Doogie immediately agreed, but actually finding time in his amazingly busy schedule made it impossible and so never came to fruition. I am sure both situations would have been a lot of fun, in my book two very talented and very likeable people.

KB: What are you currently doing?

Recent circumstances have slowed down the work rate of most musicians, including myself. Many venues have been unable to afford entertainment, and many, sadly have closed their doors for good. Having been busy for many decades I am now happy to be slowing down, although I miss the camaraderie of regular gigs. I intend to resume work with Vienna-based band “Nasty Habits”, and we will be performing our mix of original songs, coupled with favourites from my Deep Purple recordings, and including tunes that we all enjoy. I am also helping lay new tracks for Aeon Sophia, the recording outfit that features my son Richard on sitar. I will be performing with Nasty Habits at The Reigen, Vienna, on the 8th of October this year. Best Wishes to Purple fans everywhere,

Many thanks for your support.