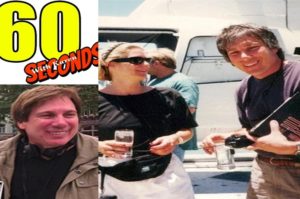 Michael Stich is a television director for The Bold and The Beautiful. He has directed a total of 2,079 episodes and counting. He also directed a movie about the 60s band The Remains.

KB: You are a television director. Was this your dream when you were a kid?

When I was a child watching TV, all I wanted to know was what was going on behind the scenes. I used to sit in the audiences of television shows and was fascinated to watch how all the people on the crew did their jobs. At age 16 I started as a camera operator and was fortunate to learn from the many directors I worked with.

KB: You have been with The Bold and The Beautiful from the beginning as a director. How did you get the job?

I had been doing camera on Young and Restless for several years. Bill Glenn, a director who mentored me, was creating The Bold and Beautiful with William Bell. He brought me on as the 2nd director.

KB: Do you have a favorite episode that you directed and why?

B&B has done many socially relevant storylines. Early in the series there was a character named Jake who was molested as a child by his father. We learn this with a flashback scene showing the father coming into the boy’s darkened room. After many weeks of the older Jake confronting his father about the abuse, I shot the episode which revealed the truth. By showing another version of the flashback, we see that it was really Jake’s uncle who pretended to be the father in the dark bedroom. This was a shock for the audience, they were certain he was guilty. I thought the story was a great example of how someone can be falsely accused of a horrible act.

KB: You directed a movie about The Remains which some people consider to be the greatest American rock group of the 60s. Are you a fan or what inspired you to make America’s Lost Band?

A family friend first brought the Remains story to me. They were a very successful group in the 1960’s and were the opening act when The Beatles did their American tour. The circumstances of what happened to them afterwards resulted in the band breaking up. They are still close friends to this day. After meeting the band members, I was inspired to make a film about their story.

KB: I give you a script and ask you to direct the movie: Do you have a title, a story and who would you pick to star as the leads?

I wish I knew the answer to that because I have been looking for such a script. The casting would be done after the characters have been defined. Having worked with so many talented actors over the years, it would be a pleasure to do a film project with anyone of them.

KB: If you look at the shows on TV today compared with the 80s TV shows: Do you notice a difference?

What I have noticed is how many current dramatic shows follow the same formula that Bold and Beautiful uses. The themes of love, jealousy, secrecy and deceit are universal and the reason that

KB: 2,079 episodes and counting: How much longer do you think B&B will continue and does it ever get boring after directing so many episodes?

The great thing about doing serial television is it constantly changes. New characters and story lines are introduced as the show evolves. The only thing that doesn’t change is name of the show. For that reason, I have found it interesting and challenging no matter how many years I have been a part of B&B.