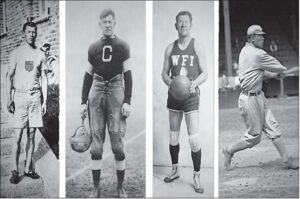 He was a quiet man.

He was an orphan who grew up as a ward of government schools.

He came out of the Oklahoma frontier.

He was a Sac and Fox Indian.

He was Jim Thorpe and he was an Olympic champion.

In the days of Jim Thorpe’s youth, American Indian children were forcibly culturally assimilated; and Thorpe was placed into the Carlisle Indian Industrial School in Pennsylvania. This was a boarding school run by the government. He was an unhappy and often truant student from 1904-1913.

It was the athleticism of Jim Thorpe that brought Carlisle to national prominence. This orphaned American Indian excelled in boxing, tennis, hockey, handball, track, high jump, discus throw and even ballroom dancing.

Known for his ability to break wild horses, by first silently studying them and watching their motions, he used this same skill to study other athlete competitors.

It was the 1912 Olympics in Stockholm. This great athlete’s shoes were missing. And so, a mismatched pair was found and he went on to win two gold medals.

However, in their great wisdom, the International Olympic Committee decided to strip a young Indian man of his well deserved medals. To further his punishment, they struck out the records that he had set in Stockholm.

What had this young athlete done to violate this Victorian code of ethics?

Had he been on drugs? No.

Had cheated in any way? No.

He had committed the egregious sin of playing two seasons of semi-pro baseball! Horrors!

In fact, Dr. Bill Malon, one of the co-founders of the international Society of Olympic Historians, said that Jim Thorpe’s achievements in those 1912 Olympics confirmed him to be “the greatest athlete of all time. Still. To me, it’s not even a question.”

Finally, in July of this year, one of the greatest athletes of all time was reinstated as the winner of the 1912 Olympics with his two Gold Medals.

As Dr. Mallon said,”I can confirm that this is true from very high placed sources. Jim Thorpe will become the sole gold medalist in the 1912 decathlon and pentathlon.”

It took over one hundred years, but on July 15, 2022, Jim Thorpe was reinstated as a great Olympic Champion.

Thorpe’s given name is Wa-Tho-Huk, which translates to Bright Path.

Over a century and this bright path finally got his medals and honors back!