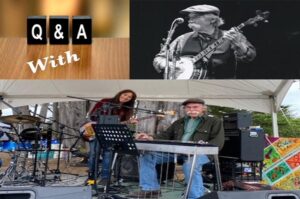 Gene Parsons is a drummer, guitarist and singer who was a member of The Byrds from 1968-1972, Nashville West, Flying Burrito Brothers and Parsons Green. He invented the Parsons/White B-Bender, which gives guitarists the option to create a pedal steel guitar sound.

KB: What did you want to be when you grew up? A musician?

I never thought I would be a professional musician. I wanted to be involved in the machine work. I grew up with machining, wielding, fabricating and repairing machinery.

KB: How old were you when you started to play drums and guitars?

KB: You and Clarence White played together in Nashville West. Did he asked you to join The Byrds where he was a band member?

Shortly after Clarence became a Byrd member, he insisted that I should be their drummer.

KB: You played drums, guitar, banjo and harmonica on albums 8-11: Did you write songs for these albums and what are the titles?

I wrote a few songs for these albums. Some of the titles are Yesterday’s Train, Gungadin, Nashville West.

KB: After the Byrds, you joined The Flying Burrito Brothers with other former Byrds members. Do you know who came up with such a cool name?

I do not. Chris Hillman is the man to ask that question. I am sure he will be able to answer it.

KB: You and your ex-wife Meridian Green formed the duo Parsons Green in the mid-80s: What is the album Birds of a Feather about?

It doesn’t really have an intended theme. It was simply a collection of tunes.

KB: If you were to make an album now with your 7 favorite songs: which songs would you pick and why?

Good question. The answer is, I don’t really know. There would certainly be some of the new songs I have written over the last few years.

KB: Are there currently artists out there you would love to collaborate with?

I would probably want to do an album with my daughter Lily and my wife Star. Maybe bring in some other musicians such as Marty Stuart.

KB: You invented the B-Bender which gives guitarists the option to create a pedal steel guitar sound: How did you come up with this idea and which guitar players are using your device now?

I am writing a book which has a section in it about the development of the stringbender but here is the very short version: Clarence and I were experimenting with sounds on his guitar where I was pulling the B string over the nut while he played the guitar. This was to attempt a steel guitar effect. It required three hands to do it. Clarence asked me to come up with a way he could do this with only his two hands, and he wanted it to be done without taking his hands of their normal playing position. I thought about it for a few days and came up with the idea of using the shoulder strap attached to a lever to accomplish it. I subsequently built the first model and installed it in Clarence’s telecaster. Marty Stuart still plays that guitar and string Bender today.

KB: Are you still active in the music or do you spend more time in your guitar workshop?

I spend most of my time in the workshop, but I am still playing in two bands and sometimes as a solo act. One of these bands is our newly formed New Nashville West where my daughter Lily plays bass, and I am playing the pedal steel guitar. I also continue to play on other recording projects as well.