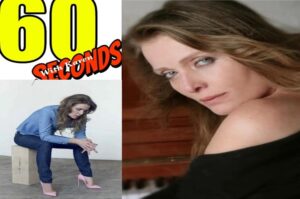 Merete Van Kamp is a Danish actress and singer. She is best known for the title role in the miniseries Princess Daisy and as Grace Van Owen in Dallas. In 2017 she opened her studio in Paris where she develops actors and writes/directs and produces series.

KB: You are born in Denmark. Did you always want to be an actress?

Always but I was born in the wrong country. Fate had it that I was discovered by a model agent in Copenhagen who got me accepted into Parker Zed in Hamburg and that’s how it all started. Along came Model Management Elite in Paris and then Hollywood.

KB: Your first film role was opposite Sir John Hurt in The Osterman Weekend. How did you get this part?

Sam Peckinpah was an impressive man. I was nineteen years old and new in town when I got to audition. Sam was sitting behind a massive wooden office table, and he was asking me questions. I lied and said that I was a graduate from The Royal Academy of Dramatic Art. We chatted for a while and then sometime later I got a call-back. This time John Hurt was in the room. I was placed next to John Hurt on a couch and we started running lines. John Hurt somehow decided to take me under his wing. He made me swear on a Bible that I would act because I needed to. Not for the money and even if it had to be on a street corner. On set Sam Peckinpah was very kind to me as I had been told horror stories about his temper. One actor claimed Sam was throwing knives around him standing by the door. But to me he was sexy and soft.

After I played John Hurt’s wife Zuna in The Osterman Weekend, my agent John Larocca ran a page in the Hollywood Reporter and the producer Lillian Gallo saw it and thought I was a good fit for the characters Daisy and Dani and as thus I was called in to do an audition which ended up being one of many call-backs: hundreds of call-backs over a one-year period and two screentests. It was a nerve-wrecking period because I wanted the role so badly, but they kept finding new things they wanted to test. With more than 700 actresses for the role, the competition was fierce. During this long-drawn-out battle, I would study, study and study and go to church in Beverly Hills to pray. I was in Las Vegas with Robert Evans who was raising funds for The Cotton Club when

I got the phone call from Producer Lillian Gallo. Omg!

KB: In the 1985/1986 season of Dallas, you played Grace Van Owen, a series regular. How was it playing for one of the top TV shows? How did you get the part?

I went for audition and 48 hours later I was on a plane to Houston. It was hard work with long hours and no free time, but we had a great cast and crew, and we would work often on the MGM studio lot. I visited friends like producer Victor Drai who also had his offices there. Barbara Carrera became one of my best friends. Larry Hagman was interesting with his red face: it was being transformed by pancake makeup into his character JR.

KB: You are also a singer. At what age did you start singing and with whom would you like to make a duet album?

I started singing seriously in the 80s. It started as fun, but I got addicted. After co-writing lyrics for the song, I’m A Big Girl Now, I went to Rick James to have him listen to it and that’s how I got him to write three songs for me. He took me to another place musically. Rick even called Robert Edwards, my singing coach, to find out what my most difficult note was. He then wrote a song within that note. He told me later that he wrote the rhythmic track Animal because white people don’t have rhythm, but I did. I would love to do a duet with Charlie Wilson or Snoop Dogg.

KB: If you were to play the lead in a movie and you could pick the director: Who would you pick?

I always had a dream to be directed by Roman Polanski in a film and of course Ridley Scott.

KB: What are you doing at the moment? Any new movies, series or maybe a new album?

I opened my company, The Van Kamp Studio, in 2017. I develop actors and write, direct and produce series. I’ve been working on a big series for the last four years and I am finally ready to start knocking on doors. I wrote a great role for myself in series as the character Karen Van Den Hat who is the owner of a modelling agency. It’s a thriller drama series inspired by true stories.