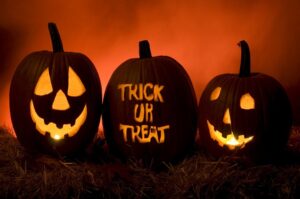 My name is Galahad and I happen to be Doctor Curmudgeon’s cousin. Although I have several positions outside of our home, I have been charged with overseeing that our household runs smoothly.

I do enjoy my position as “major domo” as Doctor Curmudgeon sometimes calls me.

I am part of the canine branch of the family, being a Siberian Husky. There are times when my nephew, Sebastian stays with us. He is a most rambunctious Husky.

However, I was rather dismayed when I found the youngster racing down the stairs, trailing a black ski jacket that partially covered the little tyke, his face smeared with mascara and pushing an old broom.

It is impossible to escape all the signs of this coming day.

The grinning pumpkins are quite nice.

But there are scarier things that surround us around this holiday:

Witches hung on doorways, peeping out of windows, astride brooms and peering out of black kettles.

Seeing all these witches brings to my mind an infamous example of mass hysteria…The Salem Witch Trials.

Three hundred and twenty nine years ago, in Salem, Massachusetts, a twenty two year old woman, Elizabeth Johnson, was among more than two hundred people accused of being witches.

From February 1692 through May 1693, nineteen people were hung and one was crushed until he died; after being found guilty of the heinous crime of witchcraft.

What started these trials and prosecutions?

One theory that I found most intriguing: From an article by Vicki Saxon in JStor Daily:

”Linnda Caporael argues that the girls suffered from convulsive ergotism, a condition caused by ergot, a type of fungus, found in rye and other grains. It produces hallucinatory, LSD-like effects in the afflicted and can cause victims to suffer from vertigo, crawling sensations on the skin, extremity tingling, headaches, hallucinations, and seizure-like muscle contractions.”

However, it seems that this theory has been one of those debunked, however fascinating it is. The cause is really a mystery, but it seems that, at that time, there were many political, religious and economic forces that appeared to coalesce to create these monstrous trials and prosecutions.

Most of the records of these victims have been pardoned, but one name has remained, that of Elizabeth Johnson. She was not executed, but her name had not been cleared.

It has taken more than three centuries and finally this horrid criminal, this witch has been pardoned.

Elizabeth’s pardon began with the curiosity of an eighth grade civics class at the North Andover Middle School. Under the direction of their teacher, Carrie LA Pierre, the class searched through records and found the legislative steps that were needed to clear the name of Elizabeth Johnson.

Senator Diana DiZoglio took up their cause and found a way to tack the appropriate legislation onto a budget bill, which was then approved.

And so, Elizabeth Johnson became the last accused witch to be officially pardoned. Thanks to some thirteen and fourteen year old youngsters, their teacher and a state senator.

It only took three hundred and twenty nine years!