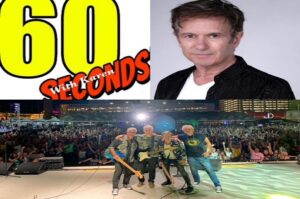 The Escape Club is a British band who had a huge hit across Europe and a No. 1 US hit in 1988 with “Wild Wild West”. Trevor Steel is the lead singer and co-writer of the song. The band will be back on the road soon and a new EP is planned for 2023.

KB: Did you always want to be a singer and musician?

Not until I heard Bowie as a teenager. His album “Hunky Dory” got me through my dismal school years and inspired me to do something different away from the production line that I found myself on. You know, school, college, job, mortgage, kids, death. I never really wanted to do all that so figured I’d join a band. A dumb move now that I look back on it but it paid off in the end.

KB: In 1983 you formed the band The Escape Club: How did you come up with such a cool band name?

I have to be honest that I don’t know. We made up all sorts of answers when asked this question back in the day. Truth is that it was the only name that emerged after weeks of trying that no-one hated. We had a long list of contenders – wish I had that now.

KB: In 1988 the song Wild Wild West was released. It went number 1 on the billboard charts and a big success in Europe too. What is the song about and were you surprised it became such a big hit?

The Wild Wild West was the Western world at the time. I put in references to Ronnie Reagan, the Cold War and Aids. Some people picked up on it but in the end, it was a great party song. People loved it for different reasons. That song changed our lives. I remember flying to America for the first time to a number one single, Yeah, it was a surprise but a good one.

KB: The band disbanded in 1992 and you became a songwriter and producer. For whom did you write and produce songs?

John Holliday (E.C. guitarist) and I produced and wrote a lot of songs in the Nineties for UK pop bands. We had a good few hits. It wasn’t the sort of music that we were used to, but we got a knack for making radio-friendly tracks. We worked on, Westlife, Boyzone, Louise Nurding and a lot more inoffensive pop but we were never completely comfortable going that far over to the bright side.

KB: If you were to make an album with 7 of your most favorite songs (not your own): Which songs would you pick and why?

Hmm, difficult question. This isn’t a list of my favorite songs which would have ‘Heroes,’ and ‘Once in a lifetime’ on it. They’re already beyond perfect and re-recording them would be to my mind, pointless. So, here’s a list that I would enjoy singing at least and hopefully wouldn’t upset the original artists too much.

• ‘Riders On The Storm’ by the Doors. I’ve always loved the Doors and we were lucky enough to work with Ray Manzarek. I love Jim Morrison’s lyrics and I think we could do a good version of this track.

• ‘I Don’t Believe In You’ By Talk Talk. One of my all-time favorite bands. I know that Mark was difficult to work with at times, but he was a genius.

• ‘Tinseltown In The Rain’ By the Blue Nile. This band have provided a soundtrack to my life. I love Paul Buchanan’s voice and couldn’t possibly touch him for performance but would like to cover this track just because I love it so much. If you haven’t checked out The Blue Nile, do it. They are one of the most underrated bands,

• ‘I Can’t Make You Love Me’ by Bonnie Raitt. Just a beautiful song.

• ‘Under The Milky Way’ by The Church. A song that reminds me of Australia and magical nights under the stars. My beloved adopted country.

• ‘Your Ghost’ By Kristen Hersch. A hauntingly beautiful song that inspired me to write a novel.

KB: Are there currently artists you would love to collaborate with? Who and why?

Ed Sheeran mentioned above. The guy is a fantastic songwriter. A talent that seemed to get lost for a while. I’m glad to see it coming back with artists like him. Billie Eilish. Love the production. So, her brother really, Finneas O’Connell.

KB: In 2010 you reformed The Escape Club. Are you still touring with the band or what are you doing now?

Yes, we are back on the road. Pre-covid we joined one of the 80’s tours and expect to do this again soon. We’re also working on an EP of songs for release in 2023.