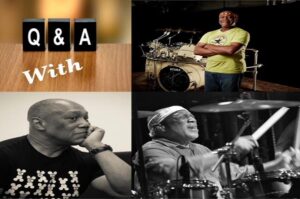 Billy Cobham is a jazz musician who is considered one of the finest drummers in fusion. He performed on albums by George Benson and Grover Washington Jr. Inducted in the Modern Drummer Hall of Fame and the Classic Drummer Hall of Fame, he is currently on tour in Europe and will perform in Zurich, Switzerland on 1 November.

KB: Did you always want to be a musician and then especially a drummer?

Yes, my vision for my personal future always included music in all aspects, especially teaching and performance.

KB: I read that you joined your father at a very early age to perform on stage with him? Tell me the story.

My dad was a self-taught musician who used his elder brother as a guide, by way of my uncle’s performances in our local church and study of music with a teacher, to provide my father with the necessary tools of music application for his future. My dad was a gifted mathematician but loved to “play what he heard on and through the piano.” So, once we were set and living in In the New York City area, he would look for extra work away from his real occupation: local clubs and bars that might welcome someone with his skills. Sometimes he played alone and then, on other occasions, he might work with a drummer and bassist. On one “job” he brought me along to play in a club as a kind of substitute for the drummer. By that time, I had convinced my parents that I was very interested in pursuing a career in music performance. My mom probably pushed my dad to take me along and I had a blast.

KB: You performed on George Benson’s album White Rabbit and Grover Washington Jr’s Soul Box. What do you remember of working with these two great people?

Primarily, that I fully enjoyed myself on both recording sessions. Due to the fact, that I respected the musicianship of both artists, interacting with them was that much easier for me to do.

KB: I read that you toured with Miles Davis?

I never toured with Miles Davis! However, in 1984 I was a member of the Gil Evan’s Orchestra that was on the same bill with Miles in Japan. We were supposed to back up Miles on a live recording, but the project was scratched from the itinerary for undisclosed reasons. So, that was as close as I came to performing in support of Miles. What served me more was that I captured his personality on film. That in itself, provided much “food for thought” over the past 38 years of viewing.

KB: Your debut album Spectrum in 1973 was a big success. It reached no. 1 on the Billboard magazine Jazz Albums chart. Were you surprised about the reception and looking back now, what would you have done differently?

50th Anniversary next year. I was absolutely surprised by the success in sales of the” Spectrum” album. My intent in producing that record was to offer it as a sonic example of my performance skills to producers of recordings and the like, nothing more. So, I was mildly shocked when I found out that record was doing so well. In 2023 I intend to perform with Gary Husband (keyboards), Rocco Zifarelli (guitars) & Mike Mondesir (bass) the music from Spectrum to celebrate the 50th anniversary.

KB: You performed with many different drum kits over the years. Do you have a favourite or one that you would recommend to every aspiring drummer?

I would recommend the Tama Bubinga Star series.

KB: You played The Montreux Jazz Festival 10 times! What do you like about this festival?

The organization of the festival is first class. To receive an invitation to perform there is always “a feather” in one’s cap.”

KB: If you were to make an album with 7 of your most favorite songs: What would you pick and why?

I believe the music that I have created in the span of my career has a special place in my heart and mind, so much so that I can’t choose any one or a few over or above others that I don’t favour as much at a particular time.

KB: Are there any current artists you would love to collaborate with or wished you had worked with?

No, not at the moment.

KB: I read that you started teaching drums online at the Billy Cobham School of Drums: Are you still doing this?

I have left the door open to those who might want study with me via Zoom.

KB: You started a tour with your Crosswinds project. Tell me more about it. Why should people come out and see you Live?

Because performing in front of real people with emotions is the ultimate goal for me. I love to harvest the responses of the audience; it makes me want to contribute to the performance template I am working within even more.