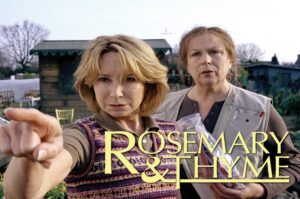 If anything can be claimed to be quintessentially anything to do with its country it should show the best of itself or reflect accurately the nature of living within its boundaries, or the sensibilities and attitudes of its people.

Rosemary and Thyme was therefore, quintessentially English. Not British. English.

Rosemary and Thyme was a show which had two central characters with two of the most recognizable English actors of their generation – Felicity Kendal and Pam Ferris. It even had a theme tune based on the Olde English traditional standard, the instantly recognizable, Scarborough Fayre. It was cozy, non-threatening, suspenseful and the type of Sunday night drama that would not frighten the population into thinking there were zombies and rapists hiding in the hedgerows ready to jump out and attack you. Their world was one with threat but not to you.

Running for 3 series of 22 episodes in total, it was an ITV original drama, which ran from 2003 until 2007. The premise was that two gardeners, Rosemary Boxer, played by Felicity Kendal, and Laura Thyme, played by Pam Ferris found themselves in jobs as gardeners which brought an added side dish of murder, mayhem and mystery. It lent itself to showing off the shrubbery and greenery of England and then Europe as Thyme, a former police officer with the skills still intact and Boxer, a horticultural lecturer combined together to solve each crime – and sort out your shrubbery in the process! Thyme has had her marital breakup courtesy of a husband running off with a younger woman and Boxer, was sacked from her lecturer’s post in horticulture due to a former beau – they did not admit to lovers – being the head of her department who had her sacked, thus she, punched him firmly somewhere painful.

They each had reason to feel aggrieved with life sop mysteries which were homely rather than challenging, became their focus. For the first series, with 6 mysteries to solve in single episodes, we started with our two protagonists meeting in the very first episode. It meant we saw the backstory rather than it trundle out later. Once established as a duo they go on to investigate mercilessly, with every horticulture job leading to murder. Fortunately for them, social media was not a thing, or somebody somewhere would have outed them as being the people you least would like to be at your house digging up your gardens – they always seem to appear, people die or they dig up, literally, bodies. The plants at least stay safe…

Of course, all the jobs they are on are for people with significant personal income – no gritty council house murders or working-class poverty here. It was genteel and lacking the social commentary that many would have wanted from their dramas, and whilst this may have felt a little pretentious, it never pretended to be anything else.

What they did in series 2, is begin by working in a prison. Instead of gritty social commentary though, the episode gave a careful nod to the Sexton Blake series of mysteries by naming a few of the characters from that world. Their universe is expanded too as Laura Thyme’s daughter is introduced though a narrative arc for them was never the principal focus of the series. She arrived in the French Riviera as both gardeners are completing a garden for a friend who wishes to open it to the public. Jeopardy comes for the duo when Rosemary has an accident which turns out not to be as it seems – whatever is in a crime drama. We also have Rosemary’s death announced after someone posing as her is killed, and our cosy twosome find themselves in the Ligurian Coast of Italy, solving more puzzles. With further mysteries in a prep school and a very English village garden scheme, all is still quintessentially great to watch.

Series Three – their final run – sees them struggling a little for cash and finding work wherever they can until… they solve more murder. It leads to a Royal angle, a famous botanist, a trip to Spain, replanting an historic garden, the creation of a memorial garden, a tennis training camp and finally an open-air theatre. Just to underline the cute nature of the premise and the program, in one mystery an abandoned baby is found under a gooseberry bush – the English standard euphemistic tale told to inquisitive children who wonder where they came from…

But the axe fell when ITV decided they wanted to shake things up. The last two episodes of the series were divorced from the final series and took some time before they were aired. The foreign jaunts would have been expensive, but one thing made them vital – the English weather. There was a need to complete things quickly in the summer as the weather turned from glorious summer sun to hailstorms. Often in the same day!

There had been preproduction completed for a 4th series, but delays meant the actors were committed to other projects and it never made it beyond preproduction.

And that was a pity. Rosemary and Thyme fitted into the type of crime drama made popular by classic detective fiction. It was the world of Dorothy L Sayers, Agatha Christie and Ngaio Marsh. It did not challenge, and it did not frighten, instead it said, here is a puzzle, all is not what it seems and watch us be clever. You knew what you were getting, and it was a comfort. The lack of backstory and retaining the same format throughout was also a strength. We did not have to contemplate whether the overarching narrative fit the characters we had grown to love. I really enjoyed it and mourned its loss when it finally left our screens. Both actors were great legendary figures for playing the types of women in Rosemary and Thyme, so it was a perfect fit. Unfortunately, it was not a perfect ITV fit for their new schedules otherwise it might have lasted that bit longer.