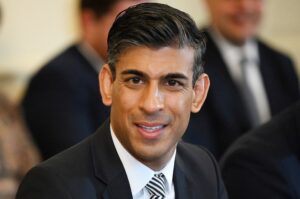 As I sit and write this, the United Kingdom has its third Prime Minister this year. What a stramash there has been.

Our first – Boris Johnson – is often likened to Donald Trump. Why? They look similar and act similarly. I wish it was all a simple coincidence and mattered not a jot… but it does.

I have always had an interest in politics with my first taste of it in 1979, when my local Member of Parliament, George Younger, became the Secretary of State for Scotland. His constituency was very proud. I became aware then of the system of government which today is still how we do things in the UK parliament in Westminster.

Let me try to explain.

The UK is divided into roughly equal geographical groups – constituencies. They each elect one person to serve as their Member of Parliament (MP). There are over 600 of them. In an election, the population over 18, who are neither in jail or mentally incapable, go and vote. Whoever gets the most votes that constituency is then elected and off to parliament till the next election – usually 5 years. If you didn’t vote for the winner then, tough – you have to put up with the one who won.

Once all the MPs are elected, the party with the biggest number is invited by the monarch – was the Queen and now the King – to form a government. The leader of the biggest party therefore becomes the Prime Minister (PM). In 2019, the Conservatives won the election and had 80 or so more MPs than all the other parties added together so they became the government. Their leader,

Then COVID hit. Johnson himself was hospitalized during the pandemic and ended up on a ventilator. We came close to losing the Prime Minister. But he came through and once COVID was over we discovered whilst he was telling to obey the rules, he was just ignoring them. He even ended up being fined by the police for it! You would think it might make him consider his position. Instead, he continued to tell tales that became taller and less believable as time progressed until people in his own government, acting as government spokespeople, realized they were answering questions about Boris Johnson and the fact he might be lying more than about government policy. He had to go.

So, the Conservative Party, forced him out in a polite but effective manner – you wrote a letter and eventually if enough wrote letters, then he may need to go. Enough did and he went.

There was then an election for a new Conservative Party leader. It involved votes with MPs, many, many candidates and eventually two became the front runners. Liz Truss and Rishi Sunak. The Conservative Party membership were then going to vote on this. The TV became involved. Both candidates over the summer, publicly pulled each other apart. Whoever was going to win had the unenviable job of bringing their entire party together. It was a depressing spectacle as each of them poured scorn on the other with Sunak making clear that what Liz Truss was suggesting economically would crash the economy. Both were now peddling programs that had never been put before the British public in any election, but we were living in strange times.

Within a very short time new PM, Truss, began the radical economic, low tax, trickle down revolution. The pound plummeted. The markets panicked. The Bank of England intervened. The public were ignored. 44 days after winning the election to become PM, having sacked two senior figures, forced to bring in a new senior figure who abandoned massive parts of her program, she resigned.
PM2, out.

We still needed a PM. The Conservative Party decided to make it a short election of about a week. Opposition parties called it what it is – a farce – and demanded what is needed – a General Election. The Conservative Party MPs refused, held a vote and only 1 candidate emerged as the only 1 with enough declared support, under the rules, so he won the contest; this time the membership of the Conservative Party did not even get a vote. There had been 2 others in the running – Penny Mordaunt who never got enough support, and Boris Johnson – remember him – who claimed he had enough support but decided it was not the time to make a comeback.

The elections of PMs 2 and 3 have involved such an infinitesimal electorate. Notably, on the day of Diwali, a Hindi became Prime Minister. Our first but pride is balanced against the fact that most people think he should go to the country and ask to be voted in properly.

Instead, his first task was to completely reverse EVERY decision that Liz Truss made. The markets are calm, the Bank of England calmer and businesses are now settled. However, we still have rampant inflation, wages are low, electricity and gas bills are exorbitant, restless unions, and we have food banks – FOODBANKS – supporting working families to get through each day. The United Kingdom is NOT a poor country, but our workers are being forced to beg and seek charity to survive. The debt we service, is the second lowest of all the G7 countries but we are being force fed a diet of poverty in the coffers of the state.

It is simply scandalous.

Many are likely to die this winter. Their vote shall not count because they will never be asked nor will they have the opportunity to express an opinion because their heating will never go on, or they will starve because they have spent their last penny on fuel. The families on or below the poverty line will be sacrificed on the altar of a political party which promised much and have delivered many things, but not what the country needs.

In Scotland we have elected a majority of MPs for the Scottish National Party since the 2015 election – just after losing the 2014 referendum. In that election of 59 available MPs, 56 were from the SNP. 50% of the population voted for the SNP. The system of voting for Westminster is the hardest for smaller parties to gain any foothold. In Scotland, during the entire reign of the former Queen, the Conservative Party, only once, won a simple majority – but not of seats, of votes. In 1959. For nearly 80 years Scotland has rejected the Conservative Party. The current stramash hardens attitudes. Not just of those like me who support the SNP, but they seem to have hardened the heads and the hearts of the Conservative Party. The party in government in London are clearly frightened of one thing – democracy. Soon may it end…

(Kailyard n. a cabbage patch, often attached to a school of writing – the Kailyard School – a genre of overly sentimental and sweet Scottish literature from the late 19th century where sentimental and nostalgic tales are told in escapist tales of fantasy, but here we seek to reverse it by making the Kailyard Observations of effective invective comment from that looks not to return to the past but to launch us into a better future by the one Donald worth believing…)
Stramash; disturbance, racket