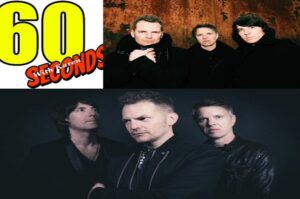 Toploader is best known for their worldwide hit “Dancing In The Moonlight” in 2000. Once you hear it you can’t get it out of your head anymore. They are still touring and hoping to get a new EP out before summer 2023. Check them out Live!

KB: Toploader’s debut album Onka’s Big Moka was released in 1999: It sold over 1 million copies. How did you come up with such a cool title?

Our other guitar player at the time had studied anthropology at Sussex University and during the course he wrote an essay on an interesting BBC documentary made in 1974 of the same name. The doc followed a tribesman in New Guinea who accumulated a huge amount of livestock and other valuable items to give away to other tribes. In offering this ‘Moka’ (gift) the tribesman would elevate his status as the “Big Man” of his tribe. We loved the idea that in some cultures being kind and generous makes you more respected whereas in our culture it is often the other way around. It’s also a great title for an album!

KB: How did you come up with the band’s name?

It was a slang phrase we used in our group when the person who rolls the joint heavily weights the weed at the end so that they get more than the others when it is passed round. The joint had been toploaded. It’s quite silly really but once you have a name, it’s just a name right!

KB: I love Dancing In The Moonlight: A King Harvest cover. Did you expect it to be this successful?

In a word yes! We kind of messed it up at first when we jammed it out. It wasn’t sounding great, but we persisted with it and it all just slipped nicely into place in the studio. We recorded it in one of our favorite studios, RAK in St John’s Wood, London. I remember when it was nearly finished, and we put it on the studio biggies (speakers) and turned it up really loud – I thought to myself ‘this is going to change things for us’. In my opinion it has one of the most instantly recognizable intros. It’s a song that just makes people feel good and it’s a privilege to play it live when you can see that enjoyment in people’s faces.

KB: You started out playing in small venues with the likes of Coldplay and Muse. Is there an explanation for their global success which left Toploader out for some reason? You should have been just as famous.

Yeah, we came through at the same time as some really good bands. We had a lot of fun back then, arguably too much fun, and maybe we took our eyes off the prize. The constant partying became more important to us than anything else, while I think Matt and Chris had their eyes fixed firmly on their careers. Subsequently the 5-year ride we went on from signing our deal to the release of our 2nd album completely burnt us all out and we split in early 2003. During those years away from each other we watched those guys go on to reach amazing heights. Well done to them as they are hugely talented guys and deserve their success. We’re happy and love what we do so it’s all good. My mum always says, ‘everything happens for a reason’.

KB: The band split in 2003 and reformed in 2009: What is different now than back then as you are still touring?

We don’t have so much pressure on us now. Back then we were signed to a major label, so it was big business. Now we make music we like and tour when we want to and absolutely love and appreciate what we do. We get on better now. We’re older and wiser and more respectful towards each other. We don’t drink every hotel bar dry each night now either, which helps!

KB: If you were to make an album with 7 of your most favorite songs: What would you pick?

KB: What are you currently up to? Is there a new album in the making?

Joe has been writing some of his best material recently. He totally gets who we are and what we’re about. These days we always think about how it will fit into our live set, so the new songs tend to be foot tappers. We hope to have a new EP out before next summer.