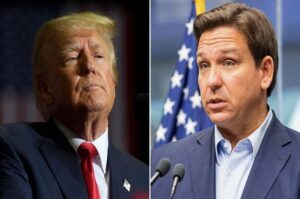 Tuesday’s election was one that seems to have some unexpected results — there were no blue or red waves. Yet some ripples were still made, especially for Democrats who didn’t lose the way many had predicted. One thing that was quite obvious, however, was that the grasp Donald Trump once held on the Republican Party is really wearing thin.

The former president made it clear that he would do whatever it takes to prevent Governor Ron DeSantis (R-FL) from seeking the Oval Office in 2024. Perhaps I should’ve known the former guy was going to do and say something crazy to block DeSantis’ chances of being the 2024 Republican presidential nominee, but I didn’t expect Donald Trump to admit to stealing the 2018 election for Ron DeSantis.

Understanding that his political limelight is quickly evaporating, Trump knew he must get himself into the daily headlines. He made a point in calling himself a “stable genius” again, but this time he’s also confessing to crimes that aren’t even the plethora of ones he’s under investigation and facing lawsuits for currently.

The “stable genius” announced on Truth Social that “in 2018 he ordered the FBI and the U.S. Attorney’s office to prematurely stop the vote counting in Florida, and that this single handedly allowed Ron DeSantis to declare a narrow victory. Trump is framing his actions as an attempt at stopping the election from being “stolen.” But the actions he’s describing are felony election fraud,” per the Palmer Report. Y’all…this is the same thing that he’s in trouble for trying to do in Georgia in 2020.

Even though it was suspish that Florida had gone opposite of every other state that is demographically similar, no one ever mentioned Trump having Feds block Florida officials from counting votes. Maybe he’s making it up but blatantly admitting to a four year old felony is a weird way to take out your political opponent. Trump’s attempting to question DeSantis’ very narrow election is a way to scandalize the Governor when he’s being portrayed as a dominant contender for 2024 after his 20-point blowout reelection bid.

Based on the Palmer Report’s analysis (which tends to be spot on) I’m pretty sure this confession is Trump’s subconscious way of saying he’s preparing to be indicted soon on one of his more serious (and easily proven) charges. Him taking down DeSantis with him would be an added bonus.