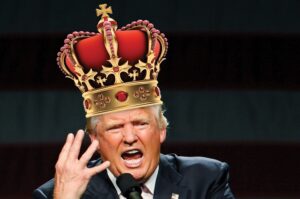 Third time’s the charm. On Tuesday evening the twice impeached, twice losing the popular vote former president announced his candidacy bid for the Republican presidential nominee in 2024. Trump filed paperwork with the FEC declaring himself as a candidate and having established a campaign committee.

“I am tonight announcing my candidacy for president of the United States,” Trump stated in his speech at his private Mar-a-Lago resort in Florida. His announcement comes a week after the midterms where Trump endorsed candidates in key races lost to their Democratic opponents. The Republican Party has yet to decide on whose fault it is for the non-existent “red wave” while some have blamed Trump.

This last week a shift occurred in the GOP after Florida Gov. Ron DeSantis brought home a huge win. DeSantis has become a top contender for the 2024 nomination. The feud between the two has sent fractures throughout the GOP. Should Trump win he will likely face off against President Joe Biden…and we all know how badly that went for the orange guy last time.