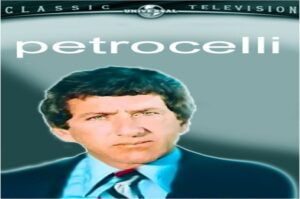 I have written before about how you get to a certain age and your memory plays tricks – at least that is what I claim! It is also true for some of us that nostalgia ain’t what it used to be! My childhood was far from idyllic. I think that the escape I envisaged was fueled by what the small screen, the TV, provided for me. Petrocelli was the biggest and best example of that.

Petrocelli was a lawyer. He was well educated, grew up in South Boston and decided to move to San Remo to avoid the high stress environment of law in a big city and practice meaningful law instead. That peculiar form of legal practice was delivered out of a trailer with his wife Maggie by his side and an ex-cop and local cowboy, Pete Ritter as his investigator.

I watched it avidly, could guarantee that it lasted for most of the 1970’s, ran to huge numbers of series and was a constant in our house as I was inspired by the series to become a lawyer. I wanted the life of Tony Petrocelli.

The reality was that it ran for two series, from 1974 to 1976 on NBC, close to when I finished primary school, but once I was enrolled at High School and taking Latin – a prerequisite qualification, at the time, for entering law – I realized I didn’t want to be a lawyer like Petrocelli but be an actor like Barry Newman who played him!

As well as Newman, the series boasted Susan Howard as Maggie, Albert Salmi as Ritter and David Huddleston as the local police – Lieutenant John Ponce. The format was simplicity itself.

etrocelli gets called in as a defense lawyer when some person is likely to be convicted of a crime, they claim they never did. His work on the case would find some clue that cast doubt – sufficient doubt – on the prosecution argument and secure the release of his client. Each episode would end with a form of justice being done – the apparently innocent walked free.

But the truth was never established, making it a morally dubious principle.

What also made it noticeable as a television piece was the use of flashback to show the audience what had happened in the crime. These flashbacks were used to illustrate points of view, different character’s experiences, thus showing the audience that fact can be seen in different ways. The cleverness was how Petrocelli took his client’s version of events, the prosecution’s and mixed it with what he had found out during the investigation and proved sufficient doubt in the jury’s mind to get his client acquitted. It was a heady mixture, even for a very young boy in Scotland!

Newman was a charismatic lead who managed to draw you into the piece with great skill. It was the decade of show and flash and the idea that somebody could take their moral viewpoint and turn their back on the glitz and big lights of the time was a draw in itself. We loved him for that. It also raised some fairly serious subjects through the narrative arc of a childless couple. At one point, Maggie fell pregnant and getting his family out of the trailer in the desert became imperative. Maggie was unable to carry the baby to full term and the sight of Petrocelli, in amongst the beginnings of the house he was building declaring, “I’m going to build the nursery anyway,” has stayed fresh in my memory. They never became three and the house never got built.

Its cancellation is somewhat shrouded in mystery. The first season was not popular – perhaps why we got it on British TV as American television executives could either sell shows not making much impact in the US as “different” or a hungry UK audience had a voracious appetite for huge impact shows that were making massive waves in America. For Petrocelli, that was the pincer movement. It was replaced by a George Peppard medical drama vehicle which went up against the major rival – Starsky and Hutch – against which Petrocelli, in the second season, hardly made a ratings dent. It got a reprieve after the poor first season ratings because the network could not agree on a show to replace it. Of course, my memory shall always hold it dear, and I will buck the trend of others who clearly saw it as more clunky than I did. It certainly had a very ‘70s air about it as men of a certain age were able to prove people of any age less intelligent than they were with their brilliant insight and melodramatic plot twists, but I can cope with that as a memory. Were it to make a return, I don’t think I would find it quite as appealing but of its time, it clearly had its effect!

I have loved this song since I was 15 years old when it first came out living at the time, in North Miami Beach, Florida...

How old were and where did you live?

Look at this grifter grifting!