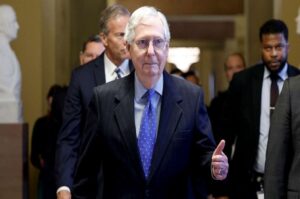 Well! He did it, again. Britney Spears can’t even keep up with this one.

Mitch McConnell was re-elected and Scott was kicked to the curb. Can you imagine? The nerve of him actually believing his “Fire Marshall Bill” looking self would be chosen to do anything but chill in the corner with that creepy look on his smug face, looking for more ways to further harm We, The People.

Mitch INVENTED the game. Heck, as old as he is, he knows how to push the envelope just far enough. He also knows when it’s time to reign in the crazy. Right now, the GOP has been made aware by America’s free, fair and honest elections; leading to every Election Deniers demise, that it is high time to curb their enthusiasm and return to “at best”, some sense of normalcy. Even if it’s as insane as their weakest links … Lookin’ at you, Cruz, Bobo, Greene, Matt, Jim, Hawley, et al.

With 3x Loser Trump, (who’ll be seeing the inside of many, many, many court rooms and never, never, ever able to step foot in the White House ever again, thanks to the Constitution’s 14th Amendment) announcing his bid for re-election as POTUS, it was clear that the GOP needed desperately to leave some things exactly as they were because the more things change, the more they stay the same.