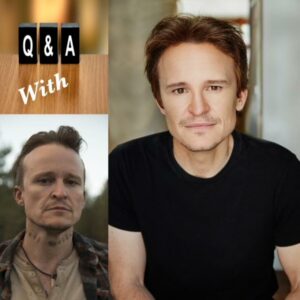 Damon Herriman is best known as Dewey Crowe in the TV series Justified. He played Killer Charles Manson in the Netflix series Mindhunter and in Quentin Tarantino’s Once Upon A Time in Hollywood.

KB: Did you always want to be an actor?

No, I kind of fell into it. I used to dress up and pretend to be various characters when I was a little kid. That encouraged my dad to get me signed up with an agent. From there I did a bunch of acting as a child, and when I became an adult, I couldn’t think of anything else to do.

KB: You are from Australia. How did you ended up playing in American series and movies? What started it?

It started with a US horror film that was shooting in Australia called House of Wax. I played this Southern redneck character called Lester (the roadkill driver). When the film was premiering in the US, I went over and happened to get an agent on that trip. After that, I just kept spending more time there and slowly (very slowly!) started to get work there.

KB: You are best known as Dewey Crowe in the great show Justified. How did you get this role?

Justified was just an audition that came up. At the time, the role of Dewey was only to appear in the pilot, so it was a lovely surprise when they asked me back for episode two. From then on, other than season 4, Dewey appeared on and off through all six seasons. It was one of my favorite characters I’ve ever played. I’ll be forever grateful to Justified.

KB: What is your best moment on that show?

Any time I had something ridiculous to do it was always a highlight for me. One scene that comes to mind is the one where Dewey jumps stark-naked out of an above-ground swimming pool to have a confrontation with Raylan. The scene ends with Raylan shooting a couple of holes in the pool, much to Dewey’s horror.

KB: You played Charles Manson twice: in the show Mindhunter and Tarantino’s Once Upon A Time In Hollywood. What intrigued you to play someone like Manson?

As an actor, getting to play a character like that was a no-brainer. Sometimes the worst of humanity is the most interesting for an actor to play. But the biggest drawcard was that I’d be getting to work with Quentin Tarantino and David Fincher. I would’ve played a doormat for those guys!

KB: If you would be the lead in a movie and you could pick the director and 3 co-stars: Who would you pick and why?

I’d have to go with Martin Scorsese directing. Because he’s one of the true greats and it would be incredible to work with him. For co-stars, I’ll say Meryl Streep, Joaquin Phoenix and Anthony Hopkins. Because they’re all so brilliant.

KB: What are you currently up to? Anything new being released or working on?

I’m currently in Cincinnati, Ohio working on a film called The Bikeriders. It’s based on a photographic book by the same name, about a biker gang in 1960s Chicago. Wonderful director and cast.