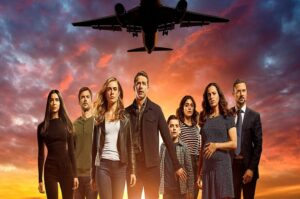 Imagine a plane ride that includes horrible turbulence for longer than you’d like, with everyone clapping as they do in the Caribbean Isles, once the plane lands.

Imagine that there are a plethora of ambulances, cop cars and a stunned world, awaiting your arrival.

Imagine being told that you’ve landed five and a half years into the future and your life, as you knew it, was no longer.

That’s exactly how this supernatural dramatic series begins. So much goes on the second 192 passengers, 193 if you count the stowaway, disembark. Every episode dives deeper and deeper into mysterious controversies involving each of the passengers.

The main characters are a semi large family, three who opted to take that flight, and four who didn’t, plus a nation of people, all looking for answers as to why all the passengers are experiencing psychic abilities, they refer to as “The Callings”.

From Angels to Demons, these passengers and those surrounding them are either loved or feared and targeted by many — solely because of their mere existence.

I could not help but notice the similarities each episode has to our present world wide political situations. I’m left wondering if it was done intentionally, tongue in cheek, or a mere coincidence. I’ll leave it to you to decide.

This series first began on NBC in 2018. It ended after the third season and luckily, Netflix, jumping on yet another opportunity, scored big by scooping it up and giving us all closure.

Like “Ozark”, it’s fourth season has been split up into two with the first part having been made available the first week of November, 2022.

It’s not over yet. There’s more to come. It has left us all speculating what will be.

Here’s to hoping that goodness will overcome evil, given the spiritual aspect of it all (akin to “The Stand” by Stephen King) hits us in the face with a frying pan somewhere in the middle of the series.

I found this entire series to be intensely captivating and had to tear myself away to return to my own reality, but couldn’t help thinking about what would come next in between viewings. I rushed through daily activities to watch or I just listened, like folks did before TV came about, while vacuuming, driving, etc. If you don’t mind diving deeply into everything you’ve ever thought about, jump in.

Rotten Tomatoes gave it a 73%.

I enjoyed the heck out of it and cannot wait for part two of the final season to drop, so rate me a 9/10.