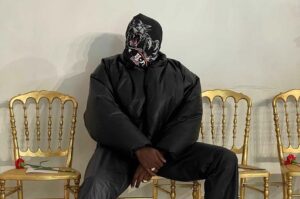 Know This. I condemn those who partner with all things hateful including bigotry, racism, anti-Semitism. I denounce all who cozy up to MAGAS, NAZI’S, GOP RELIGIOUS EXTREMISTS, no matter WHAT their mental status is.

That said, I personally believe that what we are witnessing, most likely having been born from the shock and trauma of losing his love, Kim, and having her publicly parade her new found love for all to see, is Kanye West’s Newest Alter, born from a mind who could not bare the pain or public humiliation.

DID, Dissociative Identity Disorder, once known as multiple personality syndrome, is caused from trauma when the brain, unable to deal with the emotional events taking place, splits off and creates another personality which comes to the aid of the “victim” within, to fight their battles and ease their pain.

It begins at a very young age. You can’t just get it, but it continues developing as the child grows. Some people are incorrectly diagnosed as having other mental acronyms, bi-polar disorder being one of them. It has been shown that one Alter may be bi-polar and another histrionic. Some alters are blind, while others within the same body are sighted. When tests are run, the part of the brain showing blindness tests positive and when the sighted Alter takes the lead, that same person can see again. Some alters can be left handed, while others are right handed, some are female, others male and the list goes on.

While many folks living with DID, Disassociate Identity Disorder, try their hardest to find the right therapy to live their many lives and personalities as one happy family, and while it is known that these afflicted are rarely attempting to cause harm to many, as erroneously depicted in shows like “Split”, STRESS is what is known to cause the shift. It is possible that some alters may be a cut aside the norm, and wish to cause harm, as we see here.

Watching my mother deal with her fractured mind, I studied the mind, DID and personality disorders to understand what she was experiencing. I did not leave one stone unturned. The study of the mind and brain were on my top ten study list for years. I am no expert, I did not get far enough to earn degrees, but I did learn that it takes years to fully and correctly identify a persons mental status. Bi-polar seems to be but one of the many mental disorders we are witnessing this highly public personality engage in.

With so many valid pods on YouTube, you’re welcome to see for yourself how Kanye’s most recent beliefs and actions go beyond his controversial leanings. I shall post two below.
Kanye, parading around as a white sympathizer, Nazi loving holocaust denier, may be the next personality his fractured mind created to deal with the fact that his ex wife chose that which he is not – white.

To the disgust of we, the sane, the fashion, music, media industry, et al, he is speaking out, doubling down, to the extreme that even Elon could not risk the backlash his faltering Twitter was facing. He suspended him. Meanwhile; we. attempting to diminish, cancel, protest all that is Kanye, or his alter “Ye”, also short of the word YE-HOVA, (God), fyi, for now has “Ye” in full control of his life.

Were he a no-one, influencing no-one, he’d be a blip on the screen, locked away in an insane asylum at best, or wandering the streets spewing his insane nonsense; however, given the fact that he is the monster that the industry has allowed him to be, he now needs to be muzzled for the good of the people. Good luck with that, world.

He’s gone as far as asking TFG to be his running mate. He believes the Hispanic Nazi troll, what’s his name, who he appeared with him at Mar A Lago last week, to be his friend.

Madonna also loved to push the envelope, and her personal issues drove away many who would have died for her with her paranoia, but you could never say that anything she did caused grievous harm to the world.

What we are watching unfold is a seriously sick individual who needs someone to lock him up in a place where he can get the mental help he needs because he is causing harm to himself and others and THAT, my friends, is a no can do.

These are my personal views.