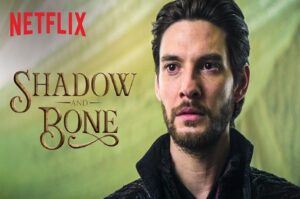 You know those fantastic, dramatic mysteries that tend to be highly entertaining, leaving you wanting more?

This is one of them.

It’s been compared to Game of Thrones. I beg to differ. If Games was a ten in your book, I mean, until that very dark, “can’t see a thing” episode, this one scores a seven point five, IMHO.
Based on two series of books called “Grishaverse” and “Six of Crows” by Leigh Bardugo, Shadow and Bone was developed for Netflix by Eric Heisserer. The continuation shall come together in 2023. I cannot wait.

Raised together in an orphanage, a heroic duo who cannot bare to be apart from one another, grow up to become a two-some who always find a way back into each other’s lives, by hook or by crook.

In a world where supernatural beings with powers to control darkness, light, life and death, plus all elements in between, the “grisha” are hated and hunted, used by a kingdom for its own power, abused by an eternal Dark villain who has waited centuries for his counterpart, the Light, for nefarious means.

A team of criminal bounty hunters also searches for this mythical being, a Sun Summoning Saint, whose capture and surrender shall bring them a magnificent reward.

Intertwined and tripping over each other, these groups, each with their own personal agendas, weave a story line that is almost hard to follow.

Entertaining, at best, slow going at first, one must listen closely for clues and foreshadowing, which cleverly hides within the shadows of bones.

What is unknown is that the least likely to be, holds the true power being sought. It will test the integrity of many and the love of all.

Who will be the victor?

Is there more to be seen? Watch and listen. I’ll never tell, except to say, I did enjoy it. I believe you will too.