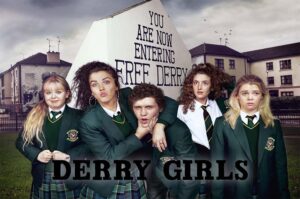 Over the Christmas holidays I have caught up with a sensational comedy drama, created by Channel 4, at their best, and with some wonderful characterizations. But the premise and the venue are set in a troubled time in a very troubled place – Derry/Londonderry. And in this city in Northern Ireland we had The Derry Girls.

This is the story of schoolgirls at a Catholic convent school, in the 1990s run by a fierce nun. Created and written by Lisa McGee, it runs over three series and only nineteen episodes and shows off just what the Brits do well, even with a comedy drama that is based upon resistance to their occupation! The girls are in an all-girls school where a young lad enters as he is English and it is felt he would be bullied and picked upon if he went to any other school. He is therefore the only male pupil in the school, and cousin to one of the girls. This is as much about his becoming a Derry Girl as it is about how this disparate number of young people deal with soldiers on the streets, the needs of growing up within the confines of a catholic orthodoxy as well as how you get to misbehave and learn whilst just being young.

It sparkles with authenticity because the writer, McGee was herself a Derry Girl. It’s based around the end of the Troubles, finishing with the Good Friday Agreement vote at which every single one of the girls and their families voted yes. But it is the story of their families which brings the politics of the time into sharp focus as it is, of course, about the real experiences of living with guns on your streets.

The story is centered mainly around Erin Quinn’s family. Erin played by Saoirse-Monica Jackson, has a mother, Mary, played by Tara Lynne O’Neill, a father, Gerry played by top Irish comedian Tommy Tiernan who is constantly picked upon by his father-in-law, Joe McCool, played by Ian McElhinney, on or around when he was in Game of Thrones, of course! McCool lives with his daughter and son-in-law following the death of his wife and he is also father to Sarah McCool played by Kathy Kiera Clarke, who is mother to Orla, played by Louisa Harland. Now whilst Mary and Gerry are attentive parents to Erin, who is awkwardly attempting to navigate the perils of being 16 years old, Orla has an inattentive mother and they operate as a pair of relatively less than savvy family unit – they are often quite dim in their outlook – and Mary and Gerry act as surrogate parents to both whilst Joe just likes to hope that Gerry disappears in as violent a way as possible.

We also have Michelle played by Jamie-Lee O’Donnell who is the sexually “liberated” wild child, who is perhaps defined more by her hope and boast than reality and experience. It is her cousin James. played by Dylan Llewellyn, who has arrived in town and is now the token male.

Finally, we have Clare, played by Nicola Coughlin, who is the enthusiastic lesbian of the group. Whilst Michelle is after the buzz, Clare is more the buzzkill and the voice of reason with their antics.

School is, of course, a minefield and at its head is Sister George Michael played by Siobhan McSweeney who has a sarcastic and caustic tongue in her head – and uses it frequently in a most unchristian manner! And of course, if you have a school friends’ group, you need a nemesis, and that comes in the form of Jenny Joyce, played by Leah O’Rourke. Jenny has the one thing the rest of them do not have – wealthy parents. It is constantly flaunted and is the source not just of great conflict but lots of humor. Episodes begin with an Assembly in school where Jenny is performing some “worthy” piece of performance art that is toe curling awful, followed by Sister Michael giving a snide remark to “thank” them.

What this does well is to take the period of great political turmoil and not make light of it but show how it affected ordinary people. We got the IRA ceasefire, the referendum, and the visit of the Clintons. It is the latter which brings great kudos to the whole enterprise. As part of their visit, the Derry Girls worry about the younger Clinton – Chelsea – and that she may end up being bored. So, they pen a letter and send it. Offering to include Chelsea in their antics, the letter gets lost and right at the end of the final episode we see it being delivered to Chelsea Clinton and she reads out what the letter says! It is the final part of the series and the epitaph for the show. Along with the appearance of Hollywood with Liam Neeson making an appearance as a Police Inspector, it shows just how significant the whole show became.

It was so significant that, as well as a large number of television awards – many of them voted for by the public – Derry Girls is the most watched show in Northern Ireland since records began, has a special mural dedicated to the Derry Girls in Derry which is a tourist attraction and is Channel 4’s second most successful comedy production – first is still Father Ted. You can get it on Netflix internationally and on All 4 in the UK. It even got a mention on The Simpsons with the Dairy Girls Ice Cream Parlor, according to Matt Groening, a direct reference to the show. They even got their own Great British Bake Off episode!!!

What worked and it worked brilliantly was the normalization of a community which has suffered at the hands of paramilitaries for years. Decades even. Even the name of the city in which they find themselves is an indication of just how divided the community is. Catholics refer to it as Derry, protestants who want to remain in the UK, as Londonderry, forcing the local council to call itself twice – Derry/Londonderry. But with the Derry Girls we were able to laugh at the absurdity of it all whilst seeing the growing up of a bunch of weans – exhibiting growing pains with hopes, fears and struggles like the rest of us. But it was also really, really funny. And I mean, really funny. The humor comes not just in the situations but in the strength of the conflicts that are both trivial and true to life. We also get the pathos of tragedy – Clare’s father dies of an aneurysm – and this makes for a really effective final episode – where the hope is tinged with loss. It was like the rest of the community, most of whom lost someone to a bullet, would understand it.