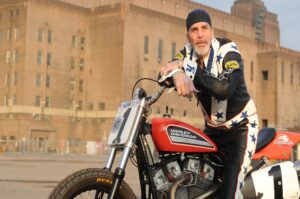 American stunt motorcycle performer and son of thrill-seeking father Evel Knievel passed away January 13, 2023, in Reno, Nevada of pancreatic cancer after being in a hospice for three days. He was 60.

As a young boy (age four) Robbie began jumping his bicycle and riding motorcycles at age seven. When he was eight, he performed in his first show with his dad at Madison Square Garden. By age twelve he was touring with his dad and performed the pre-jump shows.

Knievel had several jumps televised, including the Caesars Palace jump, the building-to-building jump in Las Vegas, a jump over a moving train, a jump in front of a volcano at the Mirage Hotel in Las Vegas and the Grand Canyon jump.

Knievel also did performance jumps, including jumping over 10 limousines, fifteen Diet Pepsi trucks, an assortment of military vehicles, and twenty-four Coca-Cola truck cabs, among others. His last jump was held on October 29, 2011, in Coachella, California where he jumped 150 feet over tractor trailer trucks. He completed over 30 jumps, setting 20 world records.

Ringside Report sends our condolences to Robbie Knievel’s family during their time of grief.