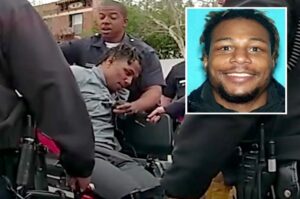 I watched a man being murdered right in front of me. He called out for help. He asked them to stop. They killed him instead.

This man called for assistance after being involved in a traffic incident. Law enforcement came and killed him, ended his life, for calling them for assistance.

He was alone. It was him against them. “Stop it or I’m going to taze you”, the badge-wearing criminal can be heard saying in the video I watched.

He was on the ground with a law enforcement officers elbow on his neck in the middle of the street. They were asking him to turn around. How could he with the pressure against his body? He was unarmed and posed no threat.

America, this is. Not Iran. Not Iraq. Not Turkey. Not China. Not North Korea. Not Hungary. Not Haiti. America.

We know the amount of Justice he will obtain posthumously will never be enough. His life was ended. His future, gone. His children, fatherless. His legacy, none. Why? Because he was black.

That’s all. Because the color of his skin preceded his assumed humanity. It gave white criminals wearing badges the right to do with them as they pleased. It pleased them to end him, because he was black. They believe they have this right.

Perhaps the criminal pressing the taze machine in front of America a multitude of times will have his employment reviewed. At best, he may lose his job. He’ll be allowed to work the same job in another county, and continue to harm those who call for help; having the audacity to do so, while bearing dark pigment.

These crimes will not end any time soon. As much as I detest knowing this fact. It is what it is in this day and age of 2023. It is the culture of the land. Africans were kidnapped and brought world-wide. They have been used and abused for hundreds of years, and still, today, the torture continues. Never were they given the ability to succeed as much as whites have been given, despite the fact that they are the SOLE reason that capitalism even exists. Even after segregation became a thing of the past, it is clear that those with more melanin are unwanted anywhere there are more whites than blacks. The crimes against blacks are vast. Racists do every and anything to hurt them however they can, in any way, shape or form that they can. There are some whites capable of seeing people, not colors. There are those who stand for people of color. I would fight tooth and nail for my family, be they blood, or not, who range in colors like rainbows, but unless the minority of us rise up against the majority who hate, we’ll die never seeing the change to this horror.

Keenan Anderson was 31 years old. He was a father, an English teacher, a mentor, a good man. His only crime was having called for help. He died of cardiac arrest 4 hours after being tazed.
May his soul rest in peace

May he know that ss America weeps for these maddening injustices, there are those of us who will never stop fighting for justice for all.

Our condolences to his family, especially his children, colleagues and students.