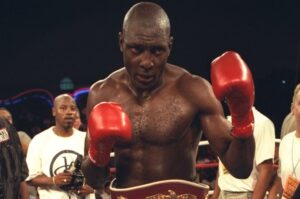 In boxing the world over, the name Fury is synonymous with so many things – the character of Tyson, the reality TV shows of Tommy and the Bombastic nature of Big John. Father to both boys, John Fury has had his own show and is a regular feature on radio and television talking about the sport. Aside from the two lads he has brought up to fight, John was also a pugilist himself. Boasting a professional record of 13 fights in the late 1980/90s and 8 victories, his was a short professional career but what about the guy credited with making him rethink his career path?

In Manchester on the 9th of October 1991, Henry Akinwande, 50-4-1, 30 KOs, stepped into the ring with Big John and knocked him out in the 3rd round. The footage has done the rounds on social media at the tail end of last year, but that may be a headline grabber, Akinwande was so much more than that. Having been professionally in the ring between 1989 and 2008, Akinwande was both Commonwealth and European heavyweight champion for a time as well as holding the WBO version of the world title from 1986 to 1987. As for Big John – Fury did fight again – 4 years later, and for the final time!

Akinwande’s formative years saw his birth in London, then living in London until he was 4 before moving to his parent’s homeland in Nigeria. He found himself boxing after his return to the UK when he was 21. It was a relatively late start for him, but he wasted little time. In 1988 and then again in 1989 he was the Amateur Boxing Association (ABA) national champion where he beat Herby Hide in the 1989 final – who was himself to go on and become a world champion. In 1986 and in 1987 he had been in the finals but fell short both times so his amateur career was pretty impressive.

Akinwande is also an Olympian, having represented the UK in Seoul at the 1988 Olympic Games. Unfortunately for Akinwande his only appearance in the ring was a points loss to the Dutch fighter Arnold Vanderlyde who was on his way to a second Olympic bronze of three won over three Olympics.

Akinwande turned over, the year after the Olympics and made his debut on the 4th of October in 1989 in the Royal Albert Hall, London by beating Carlton Headley by knockout in the first round. He was undefeated in his first 18 fights and had some notable scalps which included a former light heavyweight champion in J. B. Williamson.

In 1992, Akinwande travelled to Germany on the 19th of December to face Axel Schulz for the European title. He also faced the reality of the professional game for the first time. It was scored a majority decision draw despite everyone else sure that Akinwande had won it.

1993 did see his first major belt when he beat James Thunder for the Commonwealth crown on the 18th of March in Lewisham before returning to avenge the draw against Schultz. This time Akinwande added the European belt with a points win.

In the Royal Albert Hall on the 1st of December 1993, he defended it against Biagio Chianesse and then again on the 23rd of July in Lichtenberg against Mario Scheisser. He won both, the former by stoppage and the latter by knockout.

He was building and moving towards a world title chance as he started picking off American scalps like former IBF world champion, Tony Tucker, Brian Sargant, Calvin Jones, Frankie Swindell and not forgetting a notable win – 100 – 95 ½ – against a future WBO world champion, Johnny Nelson MBE.

In 1986, Akinwande entered the ring against Jeremy Williams for the WBO title on the 29th of June in the Fantasy Springs Casino, Indio. The title was vacant as Riddick Bowe had vacated it. Williams was stopped in the 3rd round and Akinwande was the WBO champion.

Like the European title there were two successful defences, against Russian Alexander Zolkin by stoppage on the 9th of November 1996 in the MGM Grand, Las Vegas and on points against British contender Scott Welch, on the 11th of January in Nashville. Welch had got his chance by beating another British icon, Joe Bugner.

Akinwande, then once more got to know the politics of boxing intimately as he vacated the WBO belt, in pursuance of the WBC champion – Lennox Lewis. Having beaten British iconic characters in the fight game like Johnny Nelson and John Fury, was this to be his hat trick?
Simply put – no.
In 1997, on the 12th of July in Las Vegas, Caesar’s Tahoe, Akinwande fought Lewis in a strange contest where he was disqualified in the 5th round. It all appeared a little odd but there was little complaint, and it was a 19 second hold in the 5th that finished it for Akinwande. It was a hold that he refused to relinquish, leaving the referee, Mills Lane with little option. Lane had some form for disqualification that year in the heavyweight division – he had disqualified Mike Tyson a few weeks earlier for taking a chunk out of Evander Holyfield’s ear!
Akinwande was so poor that the Nevada Commission initially looked at withholding his entire purse but feeling that the disqualification was punishment enough that was the only punishment he received.

Following that loss, Akinwande went on another winning streak leading to the possibility of fighting Holyfield for his WBA belt. Akinwande then tested positive for hepatitis B and had a long period of recuperation. He returned to the ring after around a year and came back with some determination, but he was never to get back to the heights of his previous professional career. In 2001, it was the time that showed he was now below world title level as he was beating Oliver McCall on the 17th of November in Las Vegas, when he tired towards the end and McCall caught him and laid him out in the 10th round.

Despite IBF intercontinental wins against the likes of Timo Hoffman, Ed Mahone, Cisse Salif and Anton Nel, he was never quoted for the IBF title again and his final contest on the 4th of July in Ankara saw a loss on points against Ondřej Pála.

Unlike many other British heavyweight icons, Akinwande is rarely mentioned, and I cannot see why. I cannot find a dispute with authority or a blemish upon his record, nor mind you an active role once he had retired. But for the nights he fought to win and retain his world title – he was a worthy addition to the list of British fighters of whom we should be rightly proud. And of course, he did knock out John Fury…