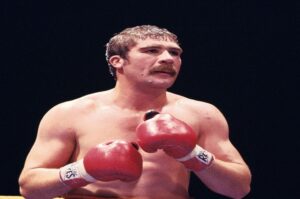 Recently departed Gerrie “The Boksburg Bomber” Coetzee 33-6-1, 21 KOs, was one of the biggest exports from South Africa to emerge and make his name on the world stage. A heavyweight who was active between 1974 and 1997, Coetzee flirted with the big names and managed to come close to greatness but never quite managed to replace the kings he faced, in the affections of the public. He was, however, the first African to fight for a heavyweight world title and the first African to hold one – the WBA crown from 1983 to 1984.

Coetzee started in the boxing game professionally on the 14th of September 1974. Beating Chris Roos on points over four rounds was never going to shake the world and his beginnings – winning in his native South Africa was never going to transcend beyond the Apartheid regime as South Africa, during the initial period of his career, was increasingly being shunned as a pariah state. If this was his pathway, it was not going to be an easy one.

Coetzee to his credit, had always been vocal about his opposition to apartheid. Had the National Government of the country been looking for a white figurehead for their theocracy, Coetzee was never going to be it. And to be fair, boxing had been the first to promote mixed race events and mixed bouts were legalized in 1977. It was different in so many other sports and whilst the rise of an international sporting boycott was part of the political arsenal of the opposition to Apartheid, the sport of boxing tried to walk a more noble path. Coetzee himself had been involved, in 1976, with the first mixed race title fight. He beat James Mathatho on the 27th of November at the Rand Stadium in Johannesburg, by knocking him out in the 7th round to become the first South African mixed race heavyweight champion. On the same bill, Elijah “Tap Tap” Makhatani became the middleweight champion by beating Jan Kies.

Coetzee was already the South African champion after winning the Transvaal heavyweight title on the 10th of April 1974 in Johannesburg by stopping Jimmy Richards in the 9th round, then beating Mike Schutte in August of 76 when Schutte was disqualified in the 6th round to become the South African champion, before becoming the mixed race champion and then defending twice – against Schutte again – this time in Johannesburg in 77, winning on points, and the eating Pierre Fourie in Johannesburg by knockout in the third round.

If he was not running out of hometown opponents, his rise through their ranks was being noticed and the time had come to get out of the country and gain greater prominence.

And so, he went to Monte Carlo on the 24th of June and beat Leon Spinks by knocking him out in the first round – now people were going to pay attention! With a short right hand, he dropped Spinks and suddenly, now that Ali had departed the stage, there was someone who could possibly challenge for world honors from the continent that had never roared in the business likes its lions do! But this was one African lion ready to make his mark and roar his way to a world title.

That opportunity came on the 20th of October 1979 in Praetoria, South Africa, when he faced John Tate for the WBA title. It had become available due to Ali’s retirement so Coetzee, the number 2 contender, had his shot. Notable for the first time that blacks were allowed into the venue, this was still an uncomfortable fight given the political situation. Over 15 rounds, Coetzee failed to win the belt and despite the home advantage, lost on points – many were left wondering why it was that he made a decent start but faded so badly as the fight progressed.

Tate was not going to be on his throne for long and was dethroned by Mike Weaver in his very first defense. Heavyweight championship boxing was therefore to return to South Africa as Weaver came to defend his crown to face Coetzee on the 25th of October 1980, when he faced Coetzee. Coetzee, like in his first title fight, was out the blocks early and doing well but then faded – again. Unlike in the fight against Tate he was not to hear the final bell as he got countered in the thirteenth and, for the first time in his career, tasted canvas.

The road to a third world title fight was always going to weave and feel long. In his next few fights, Coetzee included some notable wins – Scott LeDoux on the 27th of March 1982, and beating George Chaplin in Honolulu on the 14th of March 1981, but there was a loss against Renaldo Snipes in 1981 and a draw against Pinklon Thomas in 1983. Coetzee was staying in the mix, but few believed he was one of the big draws in the sport.

Then came world title fight number three, again for the WBA crown. Against Michael Dokes, it was widely believed that Coetzee was being brought in to provide Dokes with a perfunctory win. The Don King promoted heavyweight had the hype, but he needed the pedigree. Coetzee, as a great fighter of the recent past, would be that steppingstone for him. Pity nobody told Coetzee that he was to be a patsy. On the 23rd of September 1983, in Ohio, the upset of the year was when Coetzee knocked out Dokes in the tenth round to become Africa’s very first world heavyweight champion.
But the punch that rocked Dokes hurt Coetzee badly. His hand hurt and hurt badly. Coetzee’s hands had always been an issue for him. His Afrikaner nickname, Seer Handies, meant sore little hands! During his career it was rumored that he underwent no fewer than 23 hand surgeries! And this was to be one of those times he was to visit a hospital and have surgery.

Following surgery, the talk was of unification. The IBF champion, Larry Holmes was keen. Coetzee was really keen. The WBA played hardball and wanted to oversee the fight; Holmes was less keen on that. Don King, now promoting Coetzee, was perhaps the keenest. Both fighters were looking at a huge payday but there were serious financial issues for the promoters behind the scenes, however it looked booked and ready to rumble.

Then Coetzee broke his hand in training and the fight was off.

Recovery was slow, this time, for Coetzee, and it could be argued that now was the time that this classy guy from Africa was entering that twilight phase. But he was still the world champion and Greg Page was to be his first – and only – world title defense. On the 1st of December 1984, Page beat Coetzee by stopping him in the 8th round.

As he continued to box – beating James “Quick” Tillis IN 1985, and the fight against Frank Bruno in the UK IN Wembley on the 4th of March 1986 which was to be his first retiral. He would have got another world title shot after Bruno, but he was felled in the first round and then he announced his retirement.

After the final bell came on his boxing career, Coetzee, like so many sportsmen, talked openly and honestly about his lack of confidence in his abilities. You can see that in his two early world title fights where he faded, and it felt like he was not sure he should be winning those fights, including a final fight against Iran Barkley on the 8th of June 1997 in Hollywood – he was stopped by Barkley on the tenth round of a scheduled twelve.

Like many African fighters, his was a pathway that came with its own challenges. Being a white African, there are perhaps arguments that he had it easier than some. But like many in South Africa, not responsible for the politics of his country who wanted only to go on and show what he was capable of in a sporting sense, Coetzee carried the weight not just of expectation but also of a country that few wanted to applaud. He did come back in the 1990s, once Apartheid had been consigned to history, but these were more vanity and personal challenges than a real comeback.

But that should never take away from the fact that he fought and fought bravely and well until cancer came to take him finally away from us all in the early part of 2023. It’s a career worthy of applauding, and I for one have little difficulty in standing clapping for this doughty and fearsome lion from South Africa.