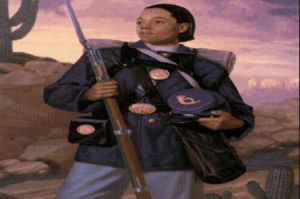 However, in 1866, it was normal and accepted that women should be prohibited from serving in the regular Untied States army. *

After all, those were the days when it was commonly assumed that women could not have the strength, fortitude, bravery, quick wittedness or intelligence to serve our country.
How could a woman possibility shoulder a rifle into battle?

Wouldn’t a woman be a mere distraction?

And yet, one woman managed to overcome.

This courageous woman was born in Missouri to a mother bound to slavery and a free man. Therefore, this meant that legally, she was a slave. But, in 1865, after the Civil War ended, she became a freed woman.

And so, it was on November 15, 1866 that Cathay Williams became the first African American woman to serve in the United States Army.

The only way that she was able to become a United States soldier was to disguise herself as a man.

But, even in those days, weren’t there medical exams for recruits? Some kind of health analysis?

Indeed there were. And, somehow she passed this cursory pre induction physical exam.

Williams signed up for three years and was assigned to the ‘Buffalo Soldiers” the thirty eighth United States Infantry Regiment. These were African American cavalry who served mostly in the Western United States and were referred to as “Buffalo Soldiers,” due to their ferocious fighting skills and dark curly hair.

Cathay did not have an easy time. Shortly after her enlistment, she contracted small pox. Convalescing from this illness was quite difficult and she continued to suffer from lingering effects of the disease. Combined with long marches, and the extreme heat, she had several subsequent hospitalizations.

In 1868, during one of her hospital confinements, a surgeon miraculously discovered that she was a woman. He informed her commanding officer and so on October 14, 1868 Captain Charles E. Clarke honorably discharged Cathay Williams.

After her discharge she was able to find employment as a cook and then as a seamstress.

She was diagnosed with diabetes and neuralgia by a physician who did examinations for the United States Pension Bureau and it was noted that her toes had been amputated and she was unable to walk without her crutches. She was entitled to a disability pension due to her military service.

However, this brilliant physician in his infinite wisdom decided that a brave African American woman who had served with honor in the infantry did not qualify.

A question lingers: Why did Cathay Williams decide to disguise herself as a man and enlist in the United States Infantry? It has been thought that she had the desire to serve her country and this gave her that opportunity and also the ability to earn a wage.

On the Wounded Warriors website, there is a quote attributed to her: “I wanted to make my own living and not be dependent on relations or friends.” –

Little is known about this heroine who was the first African American woman to honorably serve in the United States Army.

But Cathay Williams did it her way and we remember her.

* ( Note from Galahad, Doctor Curmudgeon’s cousin who is a Siberian Husky and her editor: In 1782, Deborah Sampson had disguised herself as a man and joined the Fourth Massachusetts regiment in the Revolutionary War. However she was white which eased her entrance)