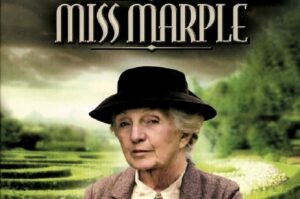 Like David Suchet, she has become the embodiment of one of the greatest literary characters of British popular fiction. That both Suchet and Hickson share that distinction is not entirely due to the fact that the author who created the figures they both portray in the small screen is the same woman – Dame Agatha Christie.

Unlike Hercule Poirot, however, Miss Jane Marple does not have a coterie of other characters with which to muse over her deliberations. She is a solo character, quiet, unassuming and who solves puzzles from an armchair, often times whilst knitting. But her razor sharp intellect belies her simple appearance and many a policeman has either been flummoxed and confused by her “interference” or has been truly in awe of her powers of deduction.

But Hickson has one advantage that Suchet did not. Christie herself spoke of how perfect Hickson would be to play the role of her eponymous character. By the time Suchet got to the point of playing Poirot, Christie was long off the scene. And whilst Hickson’s appearance was not during Christie’s lifetime either, her cannon of work stretched far enough back that she was known to Christie and hence the absolute compliment.

Now, there are versions of Jane Marple, all over the place – just as there are of Poirot. This relates to the BBC series which ran from 1984 to 1992. It ran for only 3 series and had only 12 episodes. That meant that every one of the 12 Miss Marple mysteries got an airing.

Its genesis was tricky. Christie did not care much for television, but the BBC got round her estate by producing the less well-known Tommy and Tuppence Beresford series of stories called Agatha Christie’s Partners in Crime. The Beresfords were a brother and sister duo who Christie had brought to us in short story form. The adaptations were extremely good and given that it was the BBC, after all, less objections were likely.

Hickson had been involved as an actress in previous Christie incantations including a 1946 play of Appointment with Death where she received a note which said, “I hope one day you will play my dear Miss Marple.”

Perhaps it was the simplicity with which she approached her craft which struck Christie but the one advantage Hickson had over many others was that she, by the time she played Marple onscreen, was herself in her eighties.

Starting with “The Body in the Library”, the production values were so good that it attracted a number of costars that went on to become household names as well as guest stars that were already well known to us. But it was quintessentially English. Set in a time that had been preserved in aspic, this was not an adaptation sensationalizing the times, but reverentially pointing out that murder and mayhem was something we all could end up in. What Hickson brought was the calm center which showed us how cautious and insightful understanding of the human animal could solve almost anything. Her ability to take each character in the mystery and compare them to someone at her own village of St. Mary Meads was the key to each solution. Hickson brought that analysis to bear in true reverence for her character.

Reverence was also in place in setting as each episode in or around the 1950s with great attention to the details of the time. Interestingly one famous devotee of the series had a significant event in the 1950s – Queen Elizabeth II was cr0owned and ascended the throne in 1953 – who bestowed an OBE on Hickson.

Perhaps the greatest triumph for those of us who love the books, was that Hickson rescued the role from the nonsense of some of the previous adaptations, particularly the films of Dame Margaret Rutherford. Rutherford was a film star who brought much to the films she was in, but she was no Jane Marple. Joan Hickson, as many critics enthusiastically agreed, was. You can pick up the series when it is replayed on BBC I player in the UK and on Sky. And it is not just a nostalgic watch but a very pleasant couple of hours in the company of the actress who showed how playing a simple character with razor sharp wit and intelligence should be played.