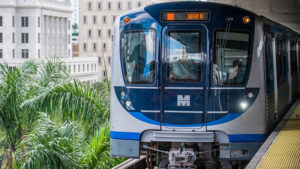 In our last column we discussed Miami’s MetroFAIL, the rapid transit part of Miami-Dade’s transit mostly bus organization, the operation of which borders on disgraceful. In that column we explained the whys, how’s and wherefores of that minor league part of Greater Miami’s utterly shameful transit division.

I did, however, “save the worst for last.”

The nobodies and no-nothings in the Miami-Dade Transit Division finally acknowledged that we needed a rail transit route to the airport, but what they built, like so much else they have done and do, is beyond shameful. YES!, they crowed, we’re going to the airport. Except, dear readers, the damn fools didn’t go to the airport.

They built a line which left the existing route somewhere west of Northwest 27th Avenue and then went to a terminal which, ostensibly, was going to be Miami’s Amdreck terminal (another complete and total disaster) and which would provide access to rental cars, buses and a host of amenities.

The problem was, in their stupidity, they built the MetroFAIL terminal NOT at the airport but on the east side of Northwest 42nd Avenue, also known as LeJeune Road. So, and therefore, if you want to use MetroFAIL to the airport it doesn’t go to the airport. You have to get off at said terminal, schlep yourself and your luggage the length of the platform and hie yourself to the point at which you can then get onto a vehicle shuttle to take you, your luggage and your fellow travelers to where you should have been in the first place, the airport.

Ladies and gentlemen, those in transit who purport to know the most know the least, which has been proven in cities, town and counties all over the country. So what then, Seth, you ask, should they have done? And the answer is simple, just as it was in Chicago, Atlanta, Washington, DC and soon Minneapolis, Seattle and a number of other cities: Damn it, you MORONS, you should have tunneled under LeJeune Road and in a subway gone under the airport with two stops thereunder in a single track loop then becoming double track again on the west side of LeJeune, just as was done in Chi-town.

Well, folks, eventually they probably will because then they will have gotten payoffs twice, and isn’t that how Miami works?

With that having been discussed we turn our focus and attention to TriFail, another bordering on buffoonery rail operation, the difference being that the latter is ostensibly a commuter train set-up, having been established during one of the multiple construction debacles of I-95 to supposedly reduce traffic on that horror of a roadway. (Seen any reduction in traffic yet? No? Neither have I and neither has anybody else.)

When TriFAIL came into existence it advertised for a Director of Marketing, a position for which I would have been ideally suited. Not only did I never receive a response to my letter and resume but they brought in a woman (as they would do so many times in regard to so many positions, male or female) who knew as much about transit marketing as I do about physics. And the only thing I know about physics is that they are to be taken when constipated.

As it turned out, each of the clowns, no-nothings and nobodies who came into each position at TriFAIL, just as with MetroFAIL knew less than the person before him or her but that, as it turns out, is the case in so many industries, the methodology being: bring in the bum you know personally who might be much worse than the highly talented and far superior person who you don’t know and who would absolutely be better than the excuse for a transit manager who you do bring in because, after all, you know the bum who knows nothing and at least you also know that that yutz won’t be a threat to you. (“The Peter Principle:” which states that most managers will generally reach his or her level of greatest incompetence, especially in jobs which they should not have been in in the first place.)

Now let me assure all of you that this is not bitterness but it is fact. A perfect example of a horrible example: After the powers that were here in Myamuh caught on to what a complete know-nothing John Dyer was and after TreFAIL went through an Exec Director or two, and after Dyer got kicked out of L. A. for the absolutely and totally terrible job he did but got caught onto about 100 times faster than they caught onto his total incompetence here in Miami, the Tri-FAIL fools brought in a female who had replaced Dyer in L. A. That woman knew LESS than nothing about transit operations and protecting the innocent, whose names I cannot share, I learned what a worthless ditz she was from the people who worked for her, first those in L. A. and then people here. As I got it from them she spent her days on the phone or filing her nails but because she knew nothing about rail transit she did nothing—nothing at all—other than what I have noted. (Nice job if you can get it).

And then came “the big day!” Oh, yeah, some big day. She flounced into the office at about noon, made some noise and the next thing anybody knew—seriously—she walked out of the office, telling the people there that she had taken a job in Washington and was leaving. Yes, just like that, no notice, no nothing and barely a “bye, y’all!” And I thought to myself that that was NOT hard to believe because after getting rid of a bum like Dyer, the other rail transit organization didn’t have the brains not to hire his clone. They didn’t and they did.

Next issue: WHY neither rail transit organization has any public credibility and what I would have done to give them a great deal of that. See you shortness and all the best!