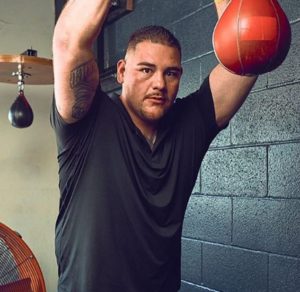 Ahead of the highly-anticipated rematch between Andy Ruiz Jr and Anthony Joshua this Saturday December 7, shown live on Sky Sports Box Office in the UK and DAZN in the US, all fighters from the stacked card worked out in front a lively crowd in Riyadh this evening. In June, Ruiz (33-1, 22 KOs) spoiled the U.S. debut of then-undefeated Heavyweight kingpin Joshua (22-1, 21 KOs), leaving New York as the unified IBF, WBA, WBO and IBO World Heavyweight Champion. The upset is considered one of the largest upsets in Heavyweight boxing history, drawing comparisons to other historic heavyweight upsets such as Buster Douglas’ shocking victory over Mike Tyson and Hasim Rahman’s knockout win over Lennox Lewis.

On fans loving him in Saudi Arabia: “It’s not going to be first or my last timing fighting here. They will see a lot more of Andy Ruiz here in Saudi Arabia.”

On keeping the same hand speed: “No, I didn’t want show off too much on what we’re working on. I wanted to give a little mix there. We’ve been training really heard, working on different stuff, so the speed, the pressure, the angles, everything we’ve been working on, hopefully December 7 we will get that victory.”

On what he has does differently this time around: “The same thing, training, making some adjustments, but we got all the tools, all the same things, so we’re focused mentally and ready for December 7.”

On having a psychological advantage: “I could but I don’t want to underestimate any fighter because I respect every fighter that comes into the ring. We all risk our lives here to provide for our loved ones, so I’m just excited for Saturday to have a really good fight.”

On confidence getting another KO: “I’ll never predict a KO, but if it comes it comes, I’m just prepared to win and use all the tools I have and take advantage of being here.”

On being proud of bringing the belts to Saudi Arabia: “I’m really proud. I’ve been working really hard my entire life to become the first Mexican Heavyweight Champion of the World. I came a long way, been through a lot of obstacles in my life. I just thank God, and I’m really excited to be here. Everybody please tune-in December 7 this Saturday in Saudi Arabia. Get your app. Check out the channel on DAZN. Let’s do it baby, we’re going make history again!”

On his preparations: “It’s been about being confident, about knowing my capabilities. I’ve had a great training camp, I am well prepared, and ready to showcase my skills.”

On what change we will see Saturday night: “I’m forever changing, that’s what training camp is about, evolution, like night and day. I shed the skin from last time, re-built myself, and all I’m doing is going to win, that’s what I’m focused on.”

On looking to have more speed in this fight: “I’m quick anyway. I’m not looking for anything except the win, that’s the objective. It’s about speed, it’s not about nothing else, the objective is just to win, win, win.”

On how much Andy Ruiz had been on his mind since the first fight: “He’s been on my mind five weeks prior to June 1 because that’s when he came in as my replacement, and he will be on my mind forever. If Andy Ruiz is dedicated to the game we will see each other a third time down the line as well. This won’t be the last time I see Andy Ruiz in the ring.”

On a third match with Andy Ruiz: “Yes because I think we make for good fights. I think there will definitely be a knockout, and people want to see bloodshed and a knockout. I think we will see each other a third time.”

On getting the victory: “If God calls it that’s what’s going to happen. I feel it in my heart, and believe in myself, so yeah I’ll be victorious. Shout out to all of my sparring partners for preparing me. You are going to see fireworks on Saturday. This is an important fight and like I said, this fight isn’t going 12 rounds.”