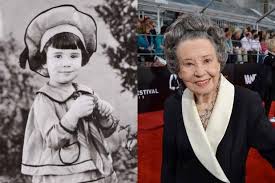 Child star Peggy-Jean Montgomery died at the age of 101 on February 24, 2020, at her home in Gustine, California. At the time of her death she was the last living film star of the Silent Era of Hollywood.

Peggy-Lee was discovered at the age of 19 months when she visited Century Studios on Sunset Boulevard in Hollywood with her mother. Director Fred Fishback noticed Peggy’s well-behaved demeanor and willingness to follow directions, prompting him to cast the youngster in a series of short films with canine star Brownie the Wonder Dog.

In her later years, Peggy-Lee adopted the name Diana Serra Carey when she found a second career as an author and silent film historian. She wrote several books including her historical novel, The Drowning of the Moon and her autobiography, “What Ever Happened to Baby Peggy: The Autobiography of Hollywood’s Pioneer Child Star”.