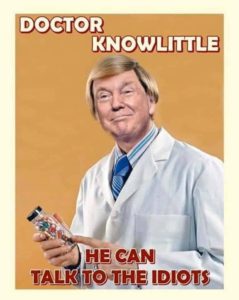 As you (hopefully) know by now, I will never, ever (unlike a guy on one of the history channels where he seems to be a regular on the crime shows) plagiarize anything that I present to you on this medium. Unless it is my personal writing, as you will see immediately below, everything (as you will see below that) has a credit to its source.

That being stated, I think it has reached the point of critical responsibility at which each of us must stand up for and act on what is right for this country, and that means, unquestionably, getting rid of (through democratic means, in an election, of course) the horror in the White House.

I feel that it has become incumbent upon me to share several issues with you, to wit:

The American FAR right (which, unfortunately and unhappily today, is anybody in or supportive of the Republican Party) has become so devoid of ethics, morality or decency that they are now resorting to physical threats (as I was subjected to several days ago) against anybody who “tells it like it is,” and “like it is” is as follows:

The “good Christians” and the NOT good Jews and anybody else who supports that low-grade excuse for a human being have no sense of decency and no moral compass. I explain:

Please note that every one of their specious, nonsensical and completely fallacious arguments has nothing to do with truth or facts, words which they despise. Said arguments are either that “we don’t want the country run by (you) goddam liberals,” or “by a socialist” or by Joe Biden or how terrible Mr. Obama was or how terrible what Bill Clinton did was. And then they go on to rant and rave about how nobody is still alive from Whitewater (another FAR right wing LIE) after which Vince Foster committed suicide, yet “they” claimed that Clinton had him murdered, but, and of course, never mentioning that, yes, absolutely and positively, “you know who” was directly responsible for the MURDER not suicide of Jeffrey Epstein.

In addition, to the liars of the FAR right, everything is a conspiracy and George Soros (notice they never mention the Koch Brothers or any of the FAR right wing money people such as Sheldon Adelson, Mickey Arison and many more) is behind it. Meantime, their “defense” of Trump is beyond disgusting, primarily because they never, ever, answer any of the following adjectival factual words or statements regarding him, but, rather, immediately launch into whatever nonsense they want to use to deflect the truth, one of the most horrific of those being how wonderful Faux Noise (Fox News is anything but news) is.

So let us move on, and I would like for you to consider the following as the words that TRULY, ACTUALLY AND ABSOLUTELY describe Trump, and, truth be told they were sent to me as part of an on-line conversation to which I was privy, a friend of mine apparently receiving an occasional email (along with others) from the person who penned this series of factual words and/or comments.

I have noticed that, in their anything but rebuttals, they never, ever, ever as much as remark upon any of those comments and I seriously commend that statement to you in order that your may bolster your valiant and honorable fight against that despicable anything but a decent human being in the White House.

Now, my friends, today’s commentary, this from People For the American Way:

The ways in which the Trump administration has failed our country by destroying our capability to respond to this public health crisis, spreading lies and dangerous disinformation, and continuing to botch the ongoing federal response on every level have been well documented and continue to multiply. But Trump’s disastrous response to the coronavirus pandemic is not only proving to be one of the deadliest failures of leadership in U.S. history, it’s exposing, clear as day, the self-serving priorities of Trump and his political allies to retain power … it’s all about THEIR interests – political and financial – and NOT the interests of the American people.

Here are just a few recent examples but the list is way too long for any one email:

Trump and his allies are exploiting the crisis to erect new voter suppression tactics and are fighting every effort to help voters cast ballots. The most egregious example is what just happened in Wisconsin, where state Republicans – with the help of the right-wing majorities on both the Wisconsin and the U.S. Supreme Courts – just refused to push back an election or extend absentee voting, forcing voters to choose between breaking the state’s “stay at home” order and risking their health (and even lives) or be denied their right to vote.

Trump had just a week earlier commented that if basic election protection measures and funding to safeguard the vote were passed into law, “you’d never have a Republican elected in this country again,” essentially admitting that suppressing voter turnout is the only way Republicans are able to win. It’s no accident that this was Wisconsin, the state that may decide the presidential election this November.

Trump just removed the head of the Pandemic Response Accountability Committee, established as an oversight body for the trillions of dollars in funds to be distributed per Congress’s coronavirus relief legislation. A few weeks ago, dismissing independent mechanisms for oversight and accountability related to relief funds, Trump said, “I’ll be the oversight.”

Speaking of evading oversight, Trump also took the opportunity amid our current national crisis to continue settling vendettas from his impeachment by firing the intelligence community’s inspector general.

According to an email from the White House this week, Donald Trump’s daughter Ivanka is now the administration’s “job czar,” and the White House is trying to credit her with securing $1.6 billion from U.S. banks in relief funds for small businesses, in an obvious attempt to snatch more credit and prestige for the Trump family in an election year.

In another attempt to consolidate power and protect his personal interests, Trump has given broad authority over the federal government’s response to his totally unqualified son-in-law Jared Kushner, whose ineptitude and ridiculous whims have frustrated scientists and other experts and have slowed the government’s response in key areas, during a fast-moving crisis in which wasting time has lethal consequences.

Trump continues to give preferential treatment to states with governors that flatter him and that he sees as important to his reelection.

We need to keep fighting for oversight and accountability – fighting like our democracy depends on it, because it does.

It’s also VITAL that future relief legislation from Congress include adequate resources and reforms to protect the right to vote in the 2020 election, since, even though it’s too early to tell exactly how, we know that November’s general election is almost sure to be disrupted in any way they can get away with.

We need to make sure that future relief bills also address the inequity that has made certain communities disproportionately vulnerable – in terms of both health and economics – in a crisis like this. For one example, we’re already seeing that Black communities are dying from coronavirus at higher rates and it’s clear that the reasons are systemic and long predate this crisis.

We need to keep exposing the shockingly immoral, corrupt, and dangerous actions of Trump Republicans at every level and the extreme right-wing judges who help enable them.

And, more than anything, we need to WIN in November and replace Trump Republicans up and down the ballot with strong progressive leaders who take seriously their commitment to defending the Constitution, American values, and Americans’ rights.

People For the American Way is adapting to the new landscape with new tools and methods to make sure we can have the biggest impact possible as a leader in all of these fights.

THANK YOU so much for standing with us, side by side, in these trying times. It’s your support that makes this work possible and it’s work that has never been more urgent or desperately needed.

We’ll get through this together. And, together, we’ll save our democracy, make it even stronger, and restore the American Way.

The kindest word that can be used for Trump, his daughter, his sons, his son-in-law or the Vice President or anybody associated with him is—seriously—“scum.” That is all and the only thing that he and they are, but, even more sadly, that same word applies to his supporters.

And one last comment from H. S. V.: PLEASE do not let anybody tell you that Trump is not responsible for the Coronavirus. He certainly is, BUT ONLY not in China. He is totally, absolutely, completely and without—on his part—any regrets or contriteness for what he—and only he and nobody else, no matter who the FAR right wants to or tries to blame—has caused, which is every single Coronavirus illness and every single death connected with Covid-19 that has occurred in the United States, which, regretfully, is now the number one country in the world with those afflicted, fully (and I saw the numbers today) one-quarter (25%) of the world’s cases are here in America and it is all due—totally, completely and absolutely–to a man who is nothing but hateful, degenerate scum and who is deserving of nothing but loathing from the American people. Sadly, there are still a huge number of people who, like Pence and others, believe he needs to have his fanny kissed daily, and much to their collective shame, appear to love doing so.

He is a vile, disgusting, hateful human being, and, hopefully, the American people will recognize and realize the horror that he has created and is totally responsible for in the once-great country. (Great before he became president). And unlike Trump, whose ONLY interest in life is stealing as much money as he can and taking revenge against any body who he even thinks has spoken factually about him (his word, in his sick mind, is “betrayed”) I want only for this horror to end and I leave you all this evening with only good and kind wishes for your safety and good health. Please be careful.

Yours truly (and sadly),