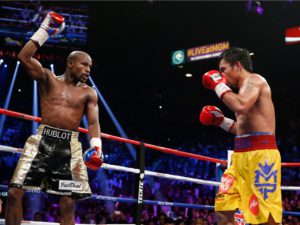 If we’ve indeed learned, then why do we continue to get burned? A brief explanation is due here. Today marks exactly five years since the most anticipated, most hyped and certainly one of the most dreadfully disappointing bouts of the modern era took place. The showdown between Floyd Mayweather, JR. and Manny Pacquiao was billed as the contest that would answer all the questions, bring the borderline fans of boxing back to its doorstep and shatter numerous financial records in the process. Think for just a moment about the numerous fight nights we may have shelled out for on a pay TV basis since then and ultimately, which ones left us with a feeling of money well spent.

What made many of us cringe in addition to the $100 PPV price tag around May 2, 2015 was the fact that it took the two biggest names in the sport to make so many care about boxing once again, if at all. For a handful of years, it seemed like we’d perhaps get a gingerly walk on the surface of the moon before we’d ever see the two titans of the sport meet in the ring. Then came that night in early 2015 when Manny just happened to bump into the pound-for-pound monarch at a Miami Heat home game. The proverbial ball began to roll and before we knew it, the wishes of many were answered and the fire was lit to get out to Vegas at all costs.

That was the case with legions of fans until they saw not only how much a hotel room was fetching alongside the fact that only a shoebox’s worth of tickets would be made available to the general public. So many beds were subsequently made vacant as multitudes of rooms were canceled once the thought of paying $2,000 for a balcony seat came to light. Of course, this didn’t stop thousands upon thousands of fans from descending upon Sin City five years ago this weekend. Although tickets to the fight itself would quickly sell out at the MGM Grand, about a dozen properties owned by MGM would open up ballrooms at their respective properties and broadcast the evening on giant screens and the promise of beer and food to go with it all.

I was one of the fortunate members of the media who was able to experience the weekend inside and out. The memories are plentiful for various reasons. Firstly, it seemed that the Las Vegas Strip was about as crowded as it could possibly be. Skillfully navigating through the labyrinth of a casino at the MGM Grand was almost as shocking as the site of the majority of blackjack tables having a $300 minimum bet on fight night. There was some fascination in being able to walk through the massive media tent in the back of the property to see black SUV’s arrive, one after another to drop off celebrities and athletes at the arena’s side entrance. To look skyward would mean seeing private jets landing with the same type of feverish intensity.

It often seemed as if the bell would never sound to get the main event underway. Alas, we all know what happened and how it all went down. Perhaps apologies are due for those of us who’ve worked hard to purge the memory from between our ears. Nevertheless, the media side of it was interesting. There were “writers” in attendance who clearly had no business there and likely had trouble distinguishing between a mouth guard and a crossing guard. No sooner had the contest ended in a walkover win for Mayweather, JR. that the ring’s ropes were removed in order for the area to be converted into a makeshift podium for the post fight press conference.

As one fighter boasted and the other fished for excuses, I ventured through several rows of the arena to collect some of the styrofoam glow sticks that had been distributed to the crowd. They made for fun gifts to the younger members of the family. As a 6AM return flight home beckoned, sleep wasn’t an option. Just before it was time to head back to the airport, I bumped into Allen Iverson. Nice guy.

So, what lessons, if any have we learned in the last five years? Are they the same ones we thought we’d learned in the five, ten or even twenty years before that hot night in the desert? In recent memory, which pay TV event lived up to its billing? An easy answer might be the astounding stoppage victory by lineal heavyweight champion Tyson Fury over Deontay Wilder last February. In any case, we all know that bigger isn’t necessarily better and with boxing, it’s always a roll of the dice.

Mayweather, JR. Vs Pacquiao, by all accounts should have taken place in 2008 or 2009, which may have been all the more exciting than what we got in 2015. Regardless, what we wouldn’t give to have our sports back during this lockdown period may shudder in comparison to the thought of ever having to watch that bout again. Such a night wasn’t the first and we know all too well that it won’t be the last. Maybe that’s part of the reason why we love it.