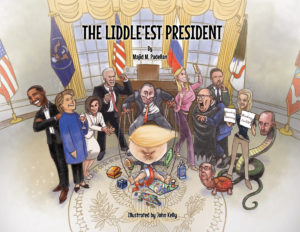 While many find themselves hunkered down under new coronavirus “Shelter in Place” rules, and listening to daily briefings by Dr. Fauci, many readers have found a distraction to put smiles on their faces and laughs in their bellies: President Donald Trump.

Or, to be more precise, a clever political humor book titled “The Liddle’est President” is formatted as a children’s book, but is meant for adults. It couples engaging, beautiful illustrations and a story-telling voice to document the rise of a “Liddle” version of the President, and tracks his improbable rise…and eventual fall.

The book was written and published by first-time author and Social Media influencer Majid M. Padellan, who has grown a Twitter audience of over 460,000 followers with his biting daily critiques of the President. He is known as “BrooklynDad_Defiant!” on the platform. Padellan also met his wife on Twitter, who moved to America with her 2 children from New Zealand to form their new family.

MSNBC Commentator Malcolm Nance wrote “Go get yourself a copy NOW. It is freaking HILARIOUS. I absolutely loved it! Buy it for your kids as a scary bedtime story.”

Harvard Law scholar Laurence Tribe raved “Here’s a terrific (and hilarious) graphic nonfiction mini-novel that tells the story of our mini-Commander in Chief. A perfect antidote to cabin fever during the lockdown. Order it right away!”

On its first day of release, The Liddle’est President immediately claimed the top 2 spots in Amazon’s Political Humor best seller list. Several days later, the book remains in the top 20.