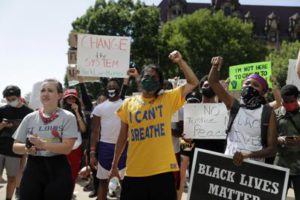 A black man was murdered by a cop. George Floyd gasped for air—gasped to move, asked to live. He was in such pain—I imagine myself, there on the asphalt, 3 men pushing down on me, on my neck. I suffer from seer chronic pain—so I imagine it would have been even more painful for me. I watched him die. About 12 times. Each time I have been shattered. I was also shattered when I watch the Kurds beheaded by the Turkish Army after Donald Trump turned his back on our allies because, now, President Erdogan is one of his best buddies. I cried for several days.

Tonight, was the second night of protest/riots spurred by the cop murder of George Floyd for the heinous crime of trying to float a $20 counterfeit bill. Yesterday was the first night of protests after a peaceful calm protest, the night before, was squashed by the cops in Minneapolis, by shooting the protestors with rubber bullets and pepper spray. They were not violent, and they were peaceful, but I guess that is just too much for cops—especially because they were, you know, just blacks—so why respect them?

Previous to the devastating events of this week, white, armed protestors were angrily shaking their white privilege asses in the face of the police in Lansing Michigan, because they wanted to get their hair cut and go to bars—The same type of protests happened in Olympia, Washington and in other states, such as Colorado, Wisconsin, Michigan, Ohio, Minnesota, Kentucky and Tennessee. There were a lot of very privileged white people with very big guns yelling at the cops. Not one person was attacked, pulled out of their cars or slammed on the pavement. Donald Trump appreciated those people and said Free Minnesota! Free Colorado! Etc. His promotion of their right-wing selfish agenda caused those people to grab at power.

Two nights ago, I watched a man in Salt Lake City pull out a bow and arrow and begin shooting it at the back of a black man—when the crowd rushed in and attacked him—and burned up his car. I watched another man beat up by a hoard of people because he was defending his business from being vandalized. I saw a woman in Seattle carrying a cheesecake down the street after the Cheesecake Factory had been looted.

Two days later—Donald Trump has declared war on the American People. The Secret Service beat up people so Donald Trump could walk to a church and hold up a bible he never reads for a photo op. He has invoked the Insurrection Act and declared Antifa-(antifascist) a terrorist organization—so yep—we are headed for an authoritarian overthrow. I have seen police shoot rubber bullets and pepper spray into people faces and 2 people have lost eyes. My nephew—who is black is 7 years old. What am I to tell him? Some people are shouting about ALL LIVES MATTER—which is just a way to sidestep the inherent racism in our society. Wake the fuck up people. Wake up—our country is dissolving into a fascist state.