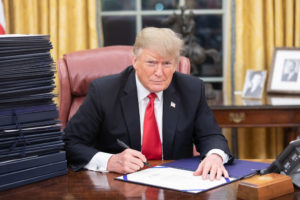 To be fair he often has a foul mood these days; it matches his mouth. His America is not great right now and he needs to turn it around. He needs everyone to see his America and realize it is great again. Because it is great, it is the best great it has ever been, and he should know because nobody knows great better than he knows great.

But the stupid people don’t know it yet.

Mr Trump knows that those out there need to know. The stupid Parscale guy needs to go because he has failed to convince them and he also promised a million and only delivered six thousand. Mr Trump could see it was less than a million even without someone helping him count. The place was not full. So, he has sent for Parscale and Parscale is waiting in the outer office nervously walking up and down.

He is ushered in.

Where are the crayons…?

Parscale realizes what is happening so he coughs.

Immediately there are three Secret Service personnel, one of whom was dressed as a big lamp and the other was dressed as an occasional chair and they leap out to wrestle Parscale to the ground and try to put a HAZMAT suit on him before Mr Trump looks up and shakes his head. This Corona Flu thing is getting way out of hand, thinks Mr Trump and then he remembers why Parscale is in the room.

“Iowa is a beautiful place. We know that, you know that, even the people of Iowa know that and let’s be clear; they don’t know everything.”

Parscale knows that, from very early on, you had to agree one way or the other with Mr Trump and most people just nod or shake heads depending on what Mr Trump wants to hear. Unfortunately, none of them realize that the whole of America, indeed most of the world is collectively shaking their heads in disbelief at what is going on in the White House.

At this point there is a meek knock on the door. Mr Trump looks up and directs the two secret service personnel who are now disguised as two pot plants to go and see what is going on. They stealthily go towards the door, both wondering how life got them to a place where they were spending their days dressed as household furnishings to look after a president that acts like a villain out of a Disney movie… it is then that one of them thinks they are stuck in Beauty and the Beast and thinks he might try out a French accent some time as the door gets opened by his partner. Behind the door is Bill Steipin.

Mr Trump wonders what he is doing here. Then he remembers. He looks for the post it note that tells him why he specifically sent for Steipin, but cannot find it. Oh, dear God, he thinks, I am going to have to try and remember.

“Brad, this is Bill, Bill, Brad.” They both look awkwardly at each other, having known each other for a very long time.

They both respond in unison.

Mr Trump likes that and smiles. It is a crooked smile, on a crooked face, in a crooked place on a crooked man. Everyone who should notice it is not in the room.

“Brad, you know Ivanka and Jared are bright people, very bright. They know bright because they have grown up with bright.” As if to prove a point Mr Trump smiles flashing bright teeth. He then continues, “They have a bright person by their side who let’s be very clear is so bright that they couldn’t fail to be bright.”

They both reply as neither one of them knew what is coming next… neither did Mr Trump.

“Brad, you have been with me for a very long time and have led our tremendous digital and data strategies, and you will remain in that role, while being a Senior Advisor to the campaign. But Ivanka and Jared don’t think you are terribly good. I think you are good, terribly good and don’t think we can afford to be both terrible and good at the same time so I do know what to do and then we can be good but not terrible”

Mr Trump thinks he has finally cracked it…

Mr Parscale relaxes too early as Mr Trump continues, “Mr Steipen you will replace Brad and issue a statement on the “state of the race”, praising Mr Parscale and pledging to expose Joe Biden as a hapless tool of the extreme left and contrast his failures with the undeniable successes of mine. I want you to expose the same media polls that had the world convinced that Hillary Clinton would be elected in 2016 and show that they are trying the same trick again in 2020. It won’t work. All clear?”

“Yes, Mr President.” It wasn’t and they weren’t.

“I want you to realize that Kik Tok and K-Pop caused this and we shall never, and I mean never, and will never happen again on my watch, understood”

At that point Mr Trump puts on his hat and sorted his tie and got his pens out. It was the cue for everyone to leave as he had the frilly pink one that he really liked and when he played with that he always wanted to be alone. Everyone left quietly, less aware than when they went in but recognizing that their paychecks would still clear at the end of each month so all was good under Mr Trump.

Silently outside the White House there was a murmur of weeping in the households around the country. Mr Trump changed his pens to the red one now, he likes red.

Whilst the author asserts his right to this as an almost original tale, any similarities to persons real or imagined are deliberate. However as there is little or no evidence that a Mr Trump ever plays with crayons or has a pink frilly pen, as far as he is aware, this is clearly fictional and never actually happened, though many of the words were press released on behalf of a Mr Trump.

The fact is that Donald Trump went to Iowa after being promised a Million faces would turn up but only around 6,000 did. This time round the inauguration counting system was not going to work so he blamed his chief of staff, Mr Parscale. Mr Parscale had boasted that more than one million people had registered to attend, but fewer than 6,200 showed up at the arena, the local fire department said. After the rally, Mr Parscale went on Twitter to blame a blocked security gate, protesters and the media for the disappointing turnout. There had been concerns about holding the rally during the coronavirus outbreak and those attending had to sign a waiver protecting the Trump campaign from responsibility. President Trump appeared deflated as he returned to the White House, with his tie undone and his Make America Great Again cap in hand. Mr

Trump then sacked him and replaced him with Mr Steipen.